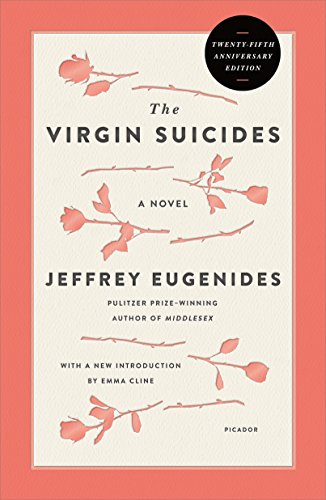 With a New Introduction by Emma Cline

First published in 1993, The Virgin Suicides announced the arrival of a major new American novelist. In a quiet suburb of Detroit, the five Lisbon sisters―beautiful, eccentric, and obsessively watched by the neighborhood boys―commit suicide one by one over the course of a single year. As the boys observe them from afar, transfixed, they piece together the mystery of the family's fatal melancholy, in this hypnotic and unforgettable novel of adolescent love, disquiet, and death. Jeffrey Eugenides evokes the emotions of youth with haunting sensitivity and dark humor and creates a coming-of-age story unlike any of our time. Adapted into a critically acclaimed film by Sofia Coppola, The Virgin Suicides is a modern classic, a lyrical and timeless tale of sex and suicide that transforms and mythologizes suburban middle-American life.

Jeffrey Eugenides was born in Detroit and attended Brown and Stanford Universities. His first novel, The Virgin Suicides, was published by FSG to great acclaim in 1993, and he has received numerous awards for his work. In 2003, he received the Pulitzer Prize for his novel Middlesex (FSG, 2002), which was also a finalist for the National Book Critics Circle Award, the International IMPAC Dublin Literary Award, and France’s Prix Médicis. The Marriage Plot (FSG, 2011) was a finalist for the National Book Critics Circle Award, and won both the Prix Fitzgerald and the Madame Figaro Literary Prize. Eugenides is a professor of creative writing in the Lewis Center for the Arts at Princeton.

“Mr. Eugenides is blessed with the storyteller's most magical gift, the ability to transform the mundane into the extraordinary.” ―The New York Times Book Review

“Arresting . . . uncannily evokes the wry voice of adolescence and a mixture of curiosity, lust, tenderness, morbidity, cynicism, and the naďveté surrounding these bizarre events.” ―The Wall Street Journal

“Picador's new paperback edition of The Virgin Suicides bears a modest white sleeve with an evocative cover image of lackadaisical teenagers lounging in a field of grass. The understatement of the binding is complemented by the rest of the package: Short of breadth, with larger than average type, it resembles nothing so much as what children refer to as a 'chapter book.' This sparsity of presentation is entirely appropriate, reflecting the marred innocence of the Lisbon girls themselves. The Virgin Suicides is a precious item, a timeless document of the eternal pangs of youth, a work which deserves to be savored and treasured and shared.” ―Michael Munro