Items related to Investigations on the Stability, Oscillation, and Stress...

B. Filzek Investigations on the Stability, Oscillation, and Stress Conditions of Airplanes with Tab Control: First Partial Report: Derivation of the Equations O

Investigations on the Stability, Oscillation, and Stress Conditions of Airplanes with Tab Control: First Partial Report: Derivation of the Equations O 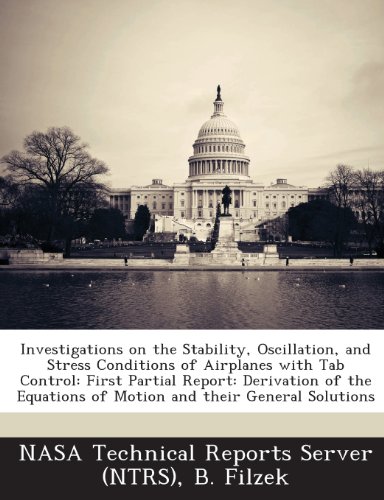 For the design and the construction of airplanes the control is of special significance, not only with regard to the flight mechhnical properties but also for the proportional arrangement of wing unit, fuselage, and tail unit. whereas these problems may be regarded as solved for direct control of airplane motions, that is, for immediate operation of the control surfaces, they are not clarified as to oscimtions, stability, and stress phenomena occurring in flight motions with Indirect control, ss realized for instance in tab control. Its modus operandi is based on the activation of a tab hinged to the trailing edge & the main control surface. Due to lift and drag variations, mcments originate about the axis of rotation of the main contnol surface which cause an up-or--down floating of the main control surface and thus a change in the direction of the airplane. Since this tab control means flying with free control surface , the treatment of this problem should provide the basis on which to judge stability, oscilhtton, and stress data.The present report is to represent a contribution toward the clarification of the problems arising and, to treat the longitudinal motion of an airplane.