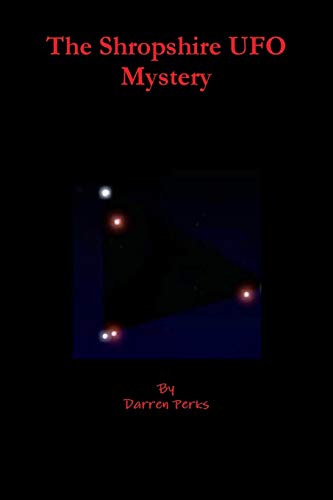 On March 30th 1993 a Shropshire man witnessed something that blew his mind, and to this day still seeks the truth to what he saw whilst innocently minding his own business. It is known as the Cosford Ufo Incident and The Shropshire Ufo Mystery. Now regarded as one of the Uk's biggest Ufo incidents to date. On the evening of 30th and into the early hours of the 31st March 1993, there were a series of Ufo sightings in the Uk involving over a hundred witnesses. Many of these were police officers and military personnel as well as members of the public. After entering British airspace freely and unknown craft or crafts, flew up and down the country and ultimately flying over two of the Uks most important airbases of that time, Raf Shawbury and Raf Cosford. What he did not realise is that it was about to change his life forever. . .

UFO Investigator, Researcher, Public Speaker, TV, Radio and Press Contributor. Darren Perks now investigates and researches UFOs and all things Extra-Terrestrial as a matter of importance. Initially sceptical until his own UFO encounter, the famous UK Cosford Incident in March 1993, Darren Perks now also looks into alien abductions, crop circles, and animal mutilations as part of his routine investigation and research work. He is now recognised as an authority on UFOs. He does extensive media work, and has acted as a consultant or contributor on numerous TV and radio shows and many documentaries and films. He is also the founder of UFO Shropshire.