Items related to Making America: A History of the United States

Making America: A History of the United States 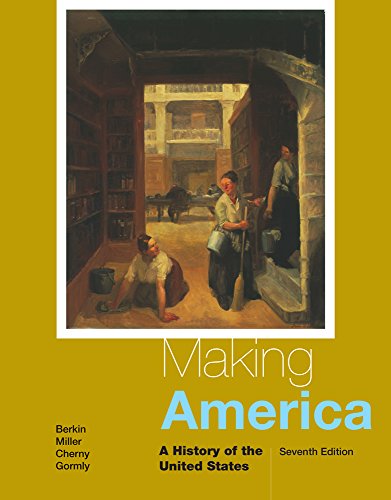 Shaped with a clear political chronology, MAKING AMERICA reflects the variety of individual experiences and cultures that comprise American society. The authors' goal is to spark readers' curiosity and invite them to explore and "do" history rather than simply read about it. The book conveys the surprising twists and turns as well as the individual and collective tales of success and failure that are the real story of the American past. The strongly chronological narrative, together with visuals and an integrated program of learning aids, makes the historical content vivid and comprehensible.

Carol Berkin received her undergraduate degree from Barnard College and her PhD from Columbia University. Her dissertation won the Bancroft Award. She is now presidential professor of history at Baruch College and the Graduate Center of City University of New York. She has written JONATHAN SEWALL: ODYSSEY OF AN AMERICAN LOYALIST (1974), FIRST GENERATIONS: WOMEN IN COLONIAL AMERICA (l996), A BRILLIANT SOLUTION: INVENTING THE AMERICAN CONSTITUTION (2002), and REVOLUTIONARY MOTHERS: WOMEN IN THE STRUGGLE FOR AMERICA'S INDEPENDENCE (2005). She has edited WOMEN OF AMERICA: A HISTORY (with Mary Beth Norton, 1979); WOMEN, WAR AND REVOLUTION (with Clara M. Lovett, 1980); WOMEN'S VOICES, WOMEN'S LIVES: DOCUMENTS IN EARLY AMERICAN HISTORY (with Leslie Horowitz, 1998); and LOOKING FORWARD/LOOKING BACK: A WOMEN'S STUDIES READER (with Judith Pinch and Carole Appel, 2005). She was contributing editor on southern women for THE ENCYCLOPEDIA OF SOUTHERN CULTURE and has appeared in the PBS series "Liberty! The American Revolution," "Ben Franklin," and "Alexander Hamilton," and in The History Channel's "Founding Fathers." Professor Berkin chaired the Dunning Beveridge Prize Committee for the American Historical Association, the Columbia University Seminar in Early American History, and the Taylor Prize Committee of the Southern Association of Women Historians. She served on the program committees for both the Society for the History of the Early American Republic and the Organization of American Historians. She has served on the Planning Committee for the U.S. Department of Education's National Assessment of Educational Progress, and she chaired the CLEP Committee for Educational Testing Service. She serves on the Board of Trustees of the Gilder Lehrman Institute of American History and the National Council for History Education.

1. Making America: A History of the United States, Loose-leaf Version

2. Making America: A History of the United States