Items related to The Love Wife 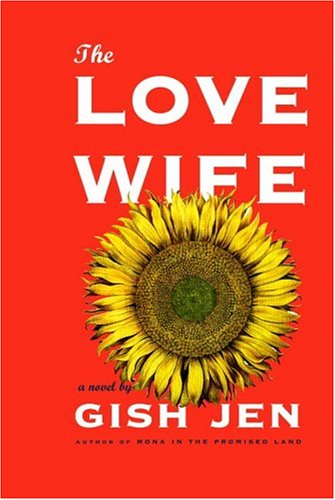 From the highly praised author of Mona in the Promised Land and Who’s Irish?–a generous, funny, explosive novel about the new “half-half” American family.

Here is Carnegie Wong, second-generation Chinese American warm heart and funny guy. Here is his WASP wife, the delicious “za-za-vavoomy” Blondie. Here are their two adopted Asian daughters, and their half-half bio son. And here is Mama Wong, Carnegie’s no-holds-barred mother, who, eternally opposed to his marriage, has arranged from her grave for a mainland Chinese relation to come look after the kids. Is this woman, as Carnegie claims, a nanny? Or is she, as Blondie fears, something else?

What happens as Carnegie and Blondie try to incorporate the ambiguous new arrival into their already complicated lives is touchingly, brilliantly, intricately told.

Powerfully evoking the contemporary American family in all its fragility and strength, Gish Jen has given us her most exuberant and accomplished novel.

The realities of mixed-heritage familes are explored in The Love Wife: those serio-comic moments that all families run into, but that are particularly difficult when its members are of completely different backgrounds. In this case, the non-American heritage is Chinese and the practitioner is an old hand. Gish Jen wrote Mona in the Promised Land, Who's Irish?, and Typical American, all rich and telling contributions to immigrant literature. The Love Wife combines humor, pathos, a big surprise at the end, and dead-on dialogue between children and parents to keep the reader engaged.

Carnegie Wong, only son of successful immigrant Mama Wong, much to his mother's horror, marries big, blonde, Caucasian Jane, known ever after, pejoratively, as Blondie. Carnegie has already adopted an Asian child of unknown origin--a factor in the story--when he meets Blondie and they adopt a Chinese girl. Lizzy and Wendy are eventually joined by a bio-baby boy, Bailey, who is "half-half" and disconcertingly blonde. The family is complete, Mama Wong dies, and along with her go all her prescriptive, preemptive, insulting remarks. Not quite. Her domineering hand reaches from the grave back to China and then to Carnegie and Blondie's home, delivering Lan, an erstwhile "cousin" Mama has bequeathed to her son and his family. She is supposed to be a nanny, but Blondie believes that she has been sent to be a "love-wife" or concubine.

The entire family dynamic is changed almost instantly. Lan, a model of passive-aggression, immediately ingratiates herself to the girls. Blondie, a model of forebearance as she is berated by her eldest daughter, misunderstood by her husband and detested by Lan, tries to befriend Lan; a lesser person would have driven her from the house. Lan is so obvious that she becomes a self-parody. Blondie quits her job to spend more time with her family; Carnegie loses his, and the family is headed for implosion.

This would have been quite enough plot to carry these characters into, and perhaps out of, heavy waters, but there are other complications; entrepreneurial thirst denied, racism in the 'burbs, a killing fire and bad choices abounding. It's a very full plate at the end, which is ambiguous enough to allow the reader to believe anything. --Valerie Ryan

Gish Jen is the author of two previous novels and a book of stories. Her honors include the Lannan Award for Fiction and the Strauss Living Award from the American Academy of Arts and Letters. She lives with her husband and two children in Cambridge, Massachusetts.

Gish Jen’s Who’s Irish? and Mona in the Promised Land are available in Vintage paperback.