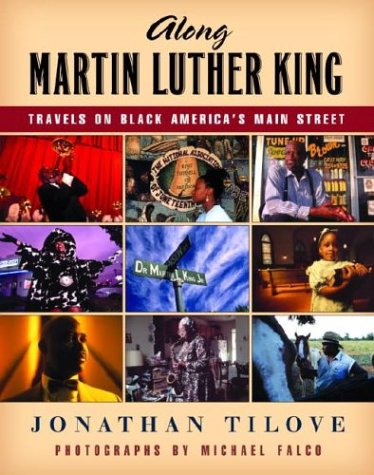 Over the course of two years, Jonathan Tilove and freelance photographer Michael Falco traveled along some of the 650 Martin Luther King Jr. streets, avenues, and boulevards across the country--in Harlem; Belle Glade, Florida; Atlanta; Selma, Alabama; Jackson and Canton, Mississippi; Chicago; Oakland, California; Portland, Oregon; and nearly a score of cities and towns throughout Texas, Louisiana, Arkansas, Oklahoma, and Kansas.

As this journey reveals, life along King is at once tightly conjoined and kaleidoscopically diverse. And that is precisely what Tilove has lyrically portrayed in the writing of this book, and what Falco has so superbly illumined with his rich photographs of the people along Martin Luther King.

We meet Annie Williams, who lives and works on Belle Glade’s Martin Luther King Jr. Boulevard, managing the Sudsy City Laundromat, and who likes the idea that every black community she visits now has a main street with a common name; and Marion Tumbleweed Beach, a seventy-three-year-old teacher, writer, poet, reporter, editor, and activist who lives on Martin Luther King Street in Selma, Alabama, but finds the phenomenon a source of dismay: “I say they still get us with trinkets. We go cheap. I resent it.”

Tilove writes of the King streets: “Map them and you map a nation within a nation, a place where white America seldom goes and black America can be itself. It is a parallel universe with a different center of gravity and distinctive sensibilities, kinship at two or three degrees of separation, not six. There is no other street like it.”

But pause on King, begin talking to folks, and the clutter, the noise of the rest of America falls away, and you are transported beyond the sometimes battered facade into a black America that, with astonishing welcome, reveals itself as not only more separate and self-contained than imagined but also more tightly interconnected, more powerfully whole. Many black people have moved beyond the neighborhoods through which King runs (though there are now King streets in new black suburbs), but few live beyond the reach of the sounds, sentiments, and stories rooted on King. These are streets united by struggle and circumstance, by history and happenstance. One King street leads to the next and next and back again.

—from Along Martin Luther King

Jonathan Tilove has written about race for Newhouse News Service since 1991. He is a three-time winner of the National Headliner Award and in 2001 was honored with a lifetime achievement award from the Columbia University Graduate School of Journalism Workshops on Journalism, Race & Ethnicity. In 2003 he was the winner of the Freedom Forum/American Society of Newspaper Editors Award for Outstanding Writing on Diversity for the newspaper series on which this book is based.

Michael Falco is a freelance photographer based in New York City whose work has appeared in National Geographic, The New York Times, British Vogue, W, Harper’s Bazaar, and Garden Design. He is the winner of numerous Associated Press photo awards and was a finalist in the 2002 Gordon Parks Photography Competition for one of his Along Martin Luther King images. Michael is also a New York City–commissioned Public Artist.