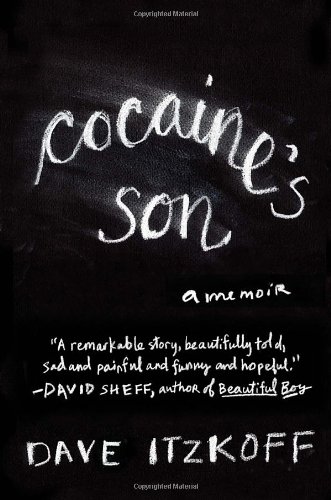 With sharp wit, self-deprecating humor, and penetrating honesty, New York Times journalist Dave Itzkoff turns a keen eye on his life with the mysterious, maddening, much-loved man of whom he writes, “for the first eight years of my life I seem to have believed he was the product of my imagination.”

Itzkoff’s father was the man who lumbered home at night and spent hours murmuring to his small son about his dreams and hopes for the boy’s future, and the fears and failures of his own past. He was the hard-nosed New York fur merchant with an unexpectedly emotional soul; a purveyor of well-worn anecdotes and bittersweet life lessons; a trusted ally in childhood revolts against motherly discipline and Hebrew school drudgery; a friend, advisor, and confidant. He was also a junkie. In Cocaine’s Son, Itzkoff chronicles his coming of age in the disjointed shadow of his father’s double life—struggling to reconcile his love for the garrulous protector and provider, and his loathing for the pitiful addict.

Through his adolescent and teen years Itzkoff is haunted by the spectacle of his father’s drug-fueled depressions and disappearances. In college, Itzkoff plunges into his own seemingly fated bout with substance abuse. And later, an emotional therapy session ends in the intense certainty that he will never overcome the same demons that have driven the older man. But when his father finally gets clean, a long “morning after” begins for them both. And on a road trip across the country and back into memory, in search of clues and revelations, together they discover that there may be more binding them than ever separated them.

Unsparing and heartbreaking, mordantly funny and powerfully felt, Cocaine’s Son clears a place for Dave Itzkoff in the forefront of contemporary memoirists.

Whatever the circumstances of our childhoods, we all grow up to become adults with questions about our parents and how they shaped the trajectories of our lives. What lessons were our mothers and fathers trying to impart to us? What pitfalls did they want us to avoid, and what mistakes of theirs did we end up repeating anyway? And how might we treat our parents differently if we were given a second chance with them?

These are all questions I confronted when I wrote about my relationship with my father, except that we were dealt a further challenge: for the first 25 years of my life, beginning in the 1970s, my father was addicted to cocaine. He was outwardly a successful man with a wife, two children, and a thriving business, but he struggled privately–-and sometimes not-so-privately-–with his drug habit, attempting everything from psychotherapy to voluntary institutionalization to cold-turkey purges to kick his addiction. When he finally got clean, I was an almost full-grown man, desperate to know who my father had been in the time I had missed, and as fascinated to discover who he had since become as he was to learn the same about me.

Cocaine’s Son is as much my story as it is my father’s: my chronicle of growing up enthralled by a man I could not fully understand, of our sometimes painful efforts, after his drug problem was conquered, to remain in each other’s lives, and the unexpected twists and turns that invariably led us back to each other. Whether or not your life has been touched by addiction issues, I hope this is a story with something to say about your own experience as someone’s child or parent.

Dave Itzkoff is a reporter on the culture desk of The New York Times and the lead contributor to its popular ArtsBeat blog. He is the author of Lads and has written for numerous publications, including GQ, Vanity Fair, Details, Wired, Elle, Spin, The New York Times Book Review, and New York magazine, which published the essay from which this book is adapted. He now has a great relationship with his father.