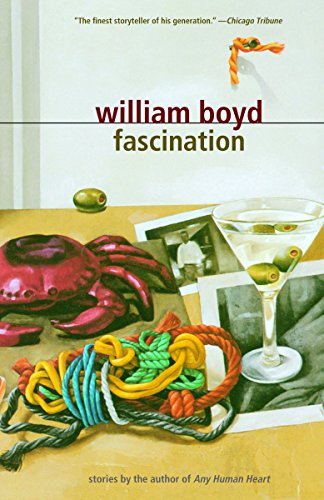 One of the most beguiling storytellers on either side of the Atlantic delivers a luminous new collection whose 14 stories are a series of variations on the theme of love–and its shady cousin lust. A film director’s journal becomes an unintended chronicle of his deepening and ruinous obsession with a leading lady (“Notebook No. 9”). While flying business class, a well-behaved English architect feels the chill onset of an otherworldly visitation that will shatter his family and career (“A Haunting”). An unhappy young boy, neglected by both his father and adulterous mother, finds an unexpected friend in an elderly painter (“Varengeville”). Wise, unsettling, humane, and endlessly surprising, Fascination lives up to its title on every page, while confirming William Boyd’s stature as a writer of incandescent talent.

A new collection of stories by the internationally acclaimed author of "Any Human Heart ("the finest storyteller of his generation" -"Chicago Tribune).
In "Notebook No. 9," a film director's journal becomes an unintentional record of his obsessive love for his leading lady and the slow destruction of their relationship.
In "Beulah Berlin, an A--Z," a performance artist, longing for stability and order, reveals the details of her chaotic life through her comments on such varied subjects as angst, hay fever, photography, baby names, sonnets, and tobacco.
In "Fantasia on a Favorite Waltz," a prostitute finds an unexpected friend in a young man who plays piano in a brothel.
In "Adult Video," we see a man's life in film format-rewinding to his years as a struggling student at Oxford, fast-forwarding to his dreams of success as a writer, and watching the present unfold as he proposes to his future wife for all the wrong reasons.
Exploring the ways a life can be dominated by a need for love and the torments that arise when love is misplaced or denied, these stories confirm William Boyd's reputation as a master of the art.


"From the Hardcover edition.

William Boyd is the author of eight novels, three collections of short stories, and twelve screenplays that have been filmed. He has been the recipient of numerous awards, including the Whitbread Award for Best First Novel, the John Llewellyn Rhys Prize, the James Tait Black Memorial Prize, and the Los Angeles Times Book Prize for Fiction. He lives in London and southwest France.