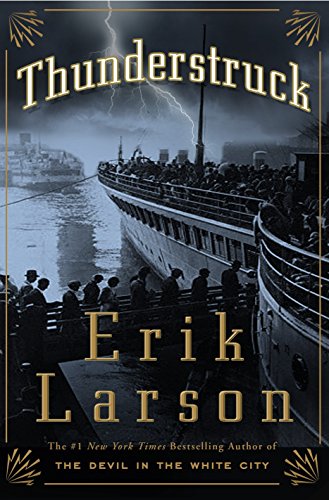 A true story of love, murder, and the end of the world’s “great hush.”

Set in Edwardian London and on the stormy coasts of Cornwall, Cape Cod, and Nova Scotia, Thunderstruck evokes the dynamism of those years when great shipping companies competed to build the biggest, fastest ocean liners; scientific advances dazzled the public with visions of a world transformed; and the rich outdid one another with ostentatious displays of wealth. Against this background, Marconi races against incredible odds and relentless skepticism to perfect his invention: the wireless, a prime catalyst for the emergence of the world we know today. Meanwhile, Crippen, “the kindest of men,” nearly commits the perfect murder.

With his unparalleled narrative skills, Erik Larson guides us through a relentlessly suspenseful chase over the waters of the North Atlantic. Along the way, he tells of a sad and tragic love affair that was described on the front pages of newspapers around the world, a chief inspector who found himself strangely sympathetic to the killer and his lover, and a driven and compelling inventor who transformed the way we communicate.

Erik Larson is the bestselling author of the National Book Award finalist and Edgar Award–winning The Devil in the White City. He lives in Seattle with his wife, three daughters, and a dog named Molly.

The evening’s lecture was entitled “The Work of Hertz.” Heinrich Hertz had died earlier in the year, and the institution invited Lodge to talk about his experiments, a task to which Lodge readily assented. Lodge had a deep respect for Hertz; he also believed that if not for his own fatal propensity for distraction, he might have beaten Hertz to the history books. In his memoir, Lodge stopped just short of claiming that he himself not Hertz, was first to prove the existence of electromagnetic waves. And indeed Lodge had come close, but instead of pursuing certain tantalizing findings, he had dropped the work and buried his results in a quotidian paper on lightning conductors.
Every seat in the lecture hall was filled. Lodge spoke for a few  moments, then began his demonstration. He set off a spark. The gun- shot crack jolted the audience to full attention. Still more startling was  the fact that this spark caused a reaction—a flash of light—in a distant, unattached electrical apparatus. The central component of this apparatus was a device Lodge had designed, which he called a “coherer,” a tube filled with minute metal filings, and which he had inserted into a conventional electric circuit. Initially the filings had no power to conduct electricity,  but when Lodge generated the spark and thus launched electromag- netic waves into the hall, the filings suddenly became conductors—they “cohered”—and allowed current to flow. By tapping the tube with his finger, Lodge returned the filings to their nonconductive state, and the circuit went dead.
Though seemingly a simple thing, in fact the audience had never seen anything like it: Lodge had harnessed invisible energy, Hertz’s waves, to cause a reaction in a remote device, without intervening wires. The applause came like thunder.
Afterward Lord Rayleigh, a distinguished mathematician and physicist and secretary of the Royal Society, came up to Lodge to congratulate him. He knew of Lodge’s tendency toward distraction. What Lodge had just demonstrated seemed a path that even he might find worthy of focus. “Well, now you can go ahead,” Rayleigh told Lodge. “There is your life work!”
But Lodge did not take Lord Rayleigh’s advice. Instead, once again exhibiting his inability to pursue one theme of research to conclusion, he left for a vacation in Europe that included a scientific foray into a very different realm. He traveled to the Ile Roubaud, a small island in the Mediterranean Sea off the coast of France, where soon very strange things began to happen and he found himself distracted anew, at what would prove to be a critical moment in his career and in the history of science.
For even as Lodge conducted his new explorations on the Ile Roubaud, far to the south someone else was hard at work—ingeniously, energetically, compulsively—exploring the powers of the invisible world, with the same tools Lodge had used for his demonstration at the Royal Institution, much to Lodge’s eventual consternation and regret.
The Great Hush

It was not precisely a vision, like some sighting of the Madonna in a tree trunk, but rather a certainty, a declarative sentence that entered his brain. Unlike other lightning-strike ideas, this one did not fade and blur but retained its surety and concrete quality. Later Marconi would say there was a divine aspect to it, as though he had been chosen over all others to receive the idea. At first it perplexed him—the question, why him, why not Oliver Lodge, or for that matter Thomas Edison?
The idea arrived in the most prosaic of ways. In that summer of 1894, when he was twenty years old, his parents resolved to escape the extraordinary heat that had settled over Europe by moving to higher and cooler ground. They fled Bologna for the town of Biella in the Italian Alps, just below the Santuario di Oropa, a complex of sacred buildings devoted to the legend of the Black Madonna. During the family’s stay, he happened to acquire a copy of a journal called Il Nuovo Cimento, in which he read an obituary of Heinrich Hertz written by Augusto Righi, a neighbor and a physics professor at the University of Bologna. Something in the article produced the intellectual equivalent of a spark and in that moment caused his thoughts to realign, like the filings in a Lodge coherer.
“My chief trouble was that the idea was so elementary, so simple in logic that it seemed difficult to believe no one else had thought of putting it into practice,” he said later. “In fact Oliver Lodge had, but he had missed the correct answer by a fraction. The idea was so real to me that I did not realize that to others the theory might appear quite fantastic.”
What he hoped to do—expected to do—was to send messages over long distances through the air using Hertz’s invisible waves. Nothing in the laws of physics as then understood even hinted that such a feat might be possible. Quite the opposite. To the rest of the scientific world what he now proposed was the stuff of magic shows and séances, a kind of electric telepathy.
His great advantage, as it happens, was his ignorance—and his mother’s aversion to priests.

Book Description Condition: New. This is a brand new book! Fast Shipping - Safe and Secure Mailer - Our goal is to deliver a better item than what you are hoping for! If not we will make it right!. Seller Inventory # 1XGHD40001UA_ns