Items related to The Punishment of Virtue: Inside Afghanistan After...

The Punishment of Virtue: Inside Afghanistan After the Taliban

The Punishment of Virtue: Inside Afghanistan After the Taliban 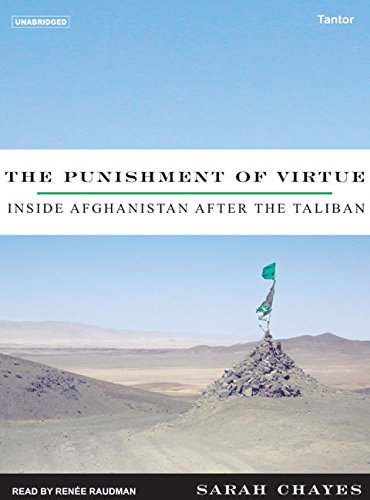 A National Public Radio reporter covering the last stand of the Taliban in their home base of Kandahar in Afghanistan's southern borderland, Sarah Chayes became deeply immersed in the unfolding drama of the attempt to rebuild a broken nation at the crossroads of the world's destiny. Her NPR tour up in early 2002, she left reporting to help turn the country's fortunes, accepting a job running a nonprofit founded by President Hamid Karzai's brother. With remarkable access to leading players in the postwar government, Chayes witnessed a tragic story unfold-the perverse turn of events whereby the U.S. government and armed forces allowed and abetted the return to power of corrupt militia commanders to the country, as well as the reinfiltration of bands of Taliban forces supported by U.S. ally Pakistan. In this gripping and dramatic account of her four years on the ground, working with Afghanis in the battle to restore their country to order and establish democracy, Chayes opens Americans' eyes to the sobering realities of this vital front in the war on terror.

She forged unparalleled relationships with the Karzai family, tribal leaders, U.S. military and diplomatic brass, and such leading figures in the Kandahar government as the imposing and highly effective chief of police-an incorruptible supporter of the Karzai regime whose brutal assassination in June 2005 serves as the opening of the book. Chayes lived in an Afghan home, gaining rich insights into the country's culture and politics and researching the history of Afghanistan's legendary resistance to foreign interference. She takes us into meetings with Hamid Karzai and the corrupt Kandahar governor, Gul Agha Shirzai, into the homes of tribal elders and onto the U.S. military base. Unveiling the complexities and traumas of Afghanistan's postwar struggles, she reveals how the tribal strongmen who have regained power-after years of being displaced by the Taliban-have visited a renewed plague of corruption and violence on the Afghan people, under the complicit eyes of U.S. forces and officials.

The story Chayes tells is a powerful, disturbing revelation of misguided U.S. policy and of the deeply entrenched traditions of tribal warlordism that have ruled Afghanistan through the centuries.

From 1997 to 2002, Sarah Chayes served as an overseas correspondent for NPR, reporting from Paris and the Balkans, as well as covering conflicts in Algeria.

Former NPR Correspondent Sarah Chayes's timely book details political and human conditions in Afghanistan since the fall of the Taliban. Skillfully weaving regional history into a back story of the country's tapestry of religions, tribes, and loyalties, she delivers a riveting and troubling message. Initially, Renee Raudman's uneven inflections may distract the listener. Her soft voice, however, is clear and ultimately equal to the intensity of Chayes's writing. Raudman's somewhat irregular phrasing and pacing also make it difficult for the listener to relax into the book's flow. This may be calculated since the overall picture presented and its implications for American foreign policy are not intended to comfort. M.O.B. © AudioFile 2007, Portland, Maine-- Copyright © AudioFile, Portland, Maine