Items related to The Slaves' War: The Civil War in the Words of...

Ward, Andrew The Slaves' War: The Civil War in the Words of Former Slaves

The Slaves' War: The Civil War in the Words of Former Slaves 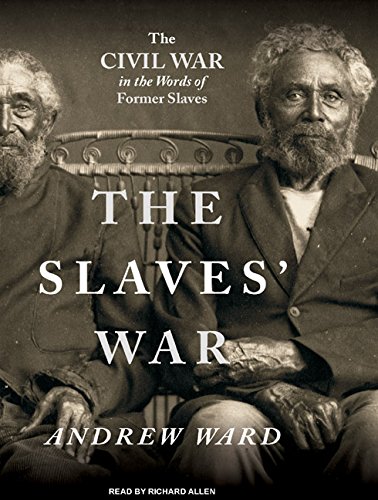 This is the first narrative of the Civil War told by the very people that it freed.

Groundbreaking, compelling, and poignant, The Slaves' War delivers an unprecedented vision of the nation's bloodiest conflict. An acclaimed historian of nineteenth-century and African American history, Andrew Ward gives us the first narrative of the Civil War told from the perspective of those whose destiny it decided. Woven together from interviews, diaries, letters, and memoirs, here is the Civil War as seen not only from battlefields and camps but also from slave quarters, kitchens, roadsides, and fields. Speaking in a quintessentially American language of biblical power and intensity, body servants, army cooks and launderers, runaways, teamsters, and gravediggers bring the war to life. From slaves' theories about the war's causes to their frank assessments of such figures as Lincoln, Davis, Lee, and Grant; from their searing memories of the carnage of battle to their often startling attitudes toward masters and liberators alike; and from their initial jubilation at the Yankee invasion of the slave South to the crushing disappointment of freedom's promise unfulfilled, The Slaves' War is an engrossing vision of America's Second Revolution.

Andrew Ward is the author of several acclaimed works of history, including the award-winning Dark Midnight When I Rise: The Story of the Fisk Jubilee Singers.

Well before sunrise on Friday, April 12, 1861, George Gregory joined a group of his fellow slaves on the Charleston waterfront and gazed across the harbor at Fort Sumter’s dismal, hulking silhouette. Sumter’s commander, Major Robert Anderson, had been holding out since the previous December, refusing demand after demand that he turn the fort over to Secessionist South Carolina. Now his time was up. Abe Lincoln had sent the word that he going to send provisions to the fort,” recalled a local slave named Josh Miles, and the whole town of Charleston” went down to see the first shot fired.” White Charlestonians darted around crying, Everybody get back! The fort will fire on the town and kill every person,” Gregory remembered. But nobody care, cause they figure if one going to be killed, they all going to be, and it don’t make a difference no-how. And just as the light commence making the sky red, and it’s light enough to see who that is standing by you BOOM! the first gun went off!” from the Secessionist batteries. The light from it shone in the sky, and made it redder! The war done commence,” and all around Gregory the folks shout, and some cry, and some sing.” That morning William H. Robinson was driving his master and a companion to Wilmington, North Carolina, when they heard the booming of cannons echoing down the Cape Fear river” and across the broad bosom of the Atlantic.” Slapping his hands together with a curse, his master looked deathly pale” as he turned to his friend and said simply, It’s come.” He hastily jotted a note and handed it to Robinson to take back to his mistress. But as was his habit with all his master’s mail, Robinson stopped first at the cabin of a literate slave named Tom to hear it read aloud. We have fired on Fort Sumter,” it said. I may possibly be called away to help whip the Yankees; may be gone three days, but not longer than that.” Robinson’s master went on to instruct his wife to tell their overseer to keep a very close watch on the Negroes, and see that there’s no private talk among them,” and to give two local whites suspected of abolitionist tendencies no opportunity to talk with the Negroes.” Soon after the firing on Fort Sumter, Louis Hughes was waiting with his team outside a store in Pontotoc, Mississippi, when his owner emerged. What do you think?” blustered master Ed McGee, climbing into his carriage. Old Abraham Lincoln has called for 75,000 men to come to Washington immediately. Well, let them come,” he snarled, we will make a breakfast of them. I can whip a half dozen Yankees with my pocket knife.” Arriving home, McGee instituted daily pistol practice that required Hughes to run over and check the target after each of his master’s rounds. He would sometimes miss the fence entirely, the ball going out into the woods beyond,” but when he managed to shoot within the bull’s eye’s vicinity, he would exclaim, Ah! I would have got him that time,” by which he meant a Yankee soldier. It seemed to Hughes that there was something very ludicrous in this pistol practice of a man who boasted that he could whip half a dozen Yankees with a jackknife.”

When Sumter fell, recalled Sam Aleckson of South Carolina, in the big house there was gladness and rejoicing, while at the quarters there was groaning and lamentation.” His fellow slaves believed that as long as Major Anderson held Fort Sumter, their prospects were at least hopeful; but when Sumter fell, they felt that their hopes were all in vain.” We done now,” they kept repeating. But then an old slave named Ben stepped forward to declare that though the white folks could laugh now,” slaves should wait till by and by.” When a young slave eyewitness to Anderson’s surrender drew himself up” and imitated the major declaring to the Rebels that if I had food for my men, and ammunition, I be damned if I would let you come in those gates!” Ben’s wife, Lucy, took heart. Amen! Bless the Lord!” she cried, and admonished her fellows to hope and pray.” Their master took Aleckson and Uncle Ben to Charleston, where they found whites going about the streets wearing blue cockades on the lapels of their coats. These were the minute men,’ and the refrain was frequently heard, Blue cockade and rusty gun / We’ll make those Yankees run like fun.’” One day young Aleckson overheard recruits saying they were on their way to the Front.’” Uncle Ben,” Aleckson asked, where’s the front’?” The old man made no immediate reply,” but eventually looked up at young Aleckson with a scowl. The front is the Devil,” he said, and returned to his chores.

Now everything was stirred up for a long spell before the war to free us come on,” said TTTTTemple Wilson. For well over a decade, the nation had been roiling over the slavery issue. Though the Compromise of 1850 had reinforced the Fugitive Slave Act, which required Northerners to assist in returning escaped slaves to their masters, and despite various Northern states’ efforts to exclude them, thousands of escaped slaves continued to seek refuge above the Mason-Dixon Line. In 1854, the Republican Party was founded to campaign against the extension of slavery into free territories. Congress passed the Kansas-Nebraska Act, which held that the settlers living in the two territories could determine for themselves whether they would join the Union as free or slave states. The result was a savage war between proslavery and abolitionist émigrés that would result in hundreds of deaths. A year later, several Northern states enacted laws forbidding state officials to enforce the Fugitive Slave Act. In 1856, as slaves in seven Southern states revolted against their masters, abolitionist Charles Sumner of Massachusetts was almost caned to death for denouncing slavery on the floor of the Senate. The following year, the Supreme Court ruled that an escaped slave named Dred Scott remained his master’s property and therefore could not sue for citizenship in the North. And all the while there had been the rising, accelerating drumbeat of Northern abolitionists on the one side and Southern apostles of disunion on the other.
As their masters waxed hysterical about Yankee agitation, many of their slaves sought prophecy in signs and omens. It was talked and threatened and all kinds of bad signs pointed to war,” said Temple Wilson, till at last they just knowed it was bound to come on.” I saw the elements all red as blood,” recalled Frank Patterson, and I saw after that a great comet; and they said there was gonna be a war.” Harriet Gresham of Florida recalled that there were hordes of ants, and everyone said this was an omen of war.” One night before the war come,” Dora Jackson’s mother and some other women was washing clothes down at a creek, when all at once they look up at the sky, and they see guns and swords” streak across the firmament and stack themselves together. They was so scared they run to the house and call old Master and tell him about it. He laughed at them and told them they was just imagining things, but it was just a few days before the war come, and they saw them guns just like they did in the sky.” In the winter of 1860 to 1861, Mississippi experienced the worst freeze that us had ever had,” recalled Liza Strickland. The limbs of the trees got so heavy with ice till they broke off. It sounded like guns firing.” Strickland knew right then and there that was a bad sign, and a war was sure coming, and when it did break out us weren’t surprised at all, and us had to stay scared to death for four long years.” Before the war I seen troubles in this land,” declared Lu Perkins of Texas. I seen a big black wave of hating going on over the land and the folks getting poorer and poorer and starving for the childrens and the old.” Perkins had a vision of new kinds of soldiers and folks fighting till blood run over the land,” starting in the far corner of the world and spread over the country” the judgment, she said, for folks being mean and greedy.” One night she awoke and saw a blazing star dragging its long tail along the ground,” whereupon a white man ran out into the night crying, Judgment! Judgment is on us!”

In the east the first concrete sign that something momentous was at hand came in the fall of 1859 when a shard from the war for Kansas arced eastward. After leading murderous raids on proslavery encampments along the Missouri border, the abolitionist John Brown and a party of whites and freed blacks set out to spark a servile insurrection by attacking the Federal arsenal at Harpers Ferry, Virginia.
Jared Maurice Arter’s master had departed for work as the arsenal’s inspector of arms when Arter heard that Brown and a party of freedmen had galloped through the county on the previous night, taken into custody a number of the leading citizens, captured Harpers Ferry and the arsenal, and barricaded himself and his men in the engine-house,” where they were holding the captured citizens as prisoners.” Arter recalled that all ...