Items related to It Occurred to Me

Dries, Carol Swarbrick It Occurred to Me

It Occurred to Me 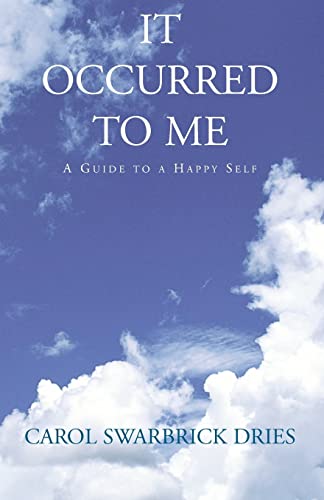 IT OCCURRED TO ME (A Guide to a Happy Self) is an easy read and an easy guide to alter your attitudes about your place in this world. The point is made in different (sometimes amusing, sometimes touching, and sometimes tough) ways that we all have a place in this universe and we are at that right place - right now. Through the journey of these essays, you can find simple solutions to everyday misconceptions and challenges.

We all have had some flawed concepts presented to us about ourselves and about our impact on others. Here’s a sort of Treasure Map out of depression and self-doubt. The author shares some very personal stories about how her map got smeared, folded and mutilated, and then, how she has been able to straighten out the wrinkles and decipher her path. The next step or turn is continually revealed, so long as one is ready and willing to take it.

The thoughts and ideas expressed in these essays can help anyone out of their self-esteem deficit. Because they are simply stated, they are profound in their universal benefits. Try to look for similarities in your own heart, in your own experiences. Have you felt the same way the author has felt about these issues? Can you see a way out? Keep reading and thinking and feeling. Open your mind to change.

At the conclusion of the book, there is a Certificate of Sufficiency (suitable for framing!) Write your name on it and keep it where you can see it. You are ENOUGH, right where you are – just because you are.

Carol Swarbrick Dries was brought up in one of the "New Age" churches. Even as a child, she was introduced to, and readily embraced, a different perspective. Being guided by a pioneering mother, she continued to pave her own path, but, as so many of us do, the path became diverted. Her writing skills did not become apparent until much later in her development and realization as a whole person.

Growing up in the ‘50’s and ‘60’s, there were so many alternative beliefs presented about morals, God and relationships that she had plenty of options to choose from. Although she didn’t try them all, there were lots of opportunities to examine old dogma and test its relevance to present-day life.

Carol began her writing career about 10 years ago by writing for her union’s newsletter. She was pleasantly surprised that she could communicate in a medium she had not previously tried. Then, came the essays. They aided her in getting through some very emotional and devastating times. Some of her essays were published and printed in magazines, but it has become apparent to her that they could assist more people in this form.

As Carol Swarbrick, she has been working as an actress for 30+ years and has been on the National Council of Actors’ Equity Association (The Professional Stage Actors’ Union) for 10+ years. Her performing resume includes 4 Broadway shows, many television series, soap operas and Made-For-TV Movies, feature films, as well as numerous regional theatre musicals. Her favorite roles have always been the "Life-Affirming" ones like "Auntie Mame".

In August of 2001, Carol married James H. Dries, for whom this book is dedicated. As far as she is concerned, this marriage would not have been possible without the growth and experiences about which she has written in this book. Together, they traveled to Nepal and trekked to Base Camp, Mount Everest, drove across the USA several times and have seen incredible beauty in their own neighborhood. Mr. And Mrs. Dries are writing a book about their relationship, A 21ST CENTURY LOVE STORY, A Romance for All Ages. Other books by them separately and together are also planned and in development.

There is no secret – but there is plenty of magic – to be found in this life. Ms. Swarbrick Dries claims that if she can do it, so can you!

1. It Occurred to Me (Paperback or Softback)

2. It Occurred to Me

3. It Occurred to Me

4. It Occurred to Me