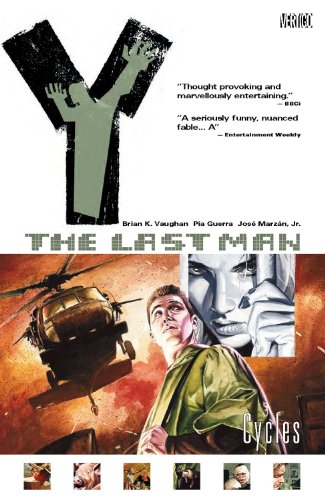 As Yorick Brown, the last man on Earth, begins to make his way across the country to California, he and his companions are forced to make an unscheduled stop in Marrisville, Ohio—a small town with a big secret. Collects issues #6-10 of the runaway hit Vertigo series by Brian K. Vaughan (EX-MACHINA, RUNAWAYS) and Pia Guerra.

Brian K. Vaughan has previously written episodes of Swamp Thing for DC and The Hood mini-series. JG Jones has created covers for Just A Pilgrim (available from Titan) and Marvel Boy and Black Widow. He is currently working on Wonder Woman: Hiketeia.

Adult/High School--This book reprints issues 6 through 10 of the series. Cycles continues the story of young escape artist Yorick Brown and his pet monkey Ampersand, the only survivors of a mysterious plague that killed all the male mammals on Earth. This title finds Yorick and his pet are under the care of biologist Dr. Mann and Agent 355, an operative of the collapsed U.S. government. The two decide to sneak the somewhat willing Yorick from battle-torn Boston to a laboratory on the West Coast to discover what allowed the pair to survive. After Yorick disguises himself in a gas mask, the three hop a train and find themselves in a strangely idyllic town in rural Ohio. After only a brief rest, the feminist terrorist group Daughters of the Amazon tracks them down. Despite the action sequences, this is not a typical superhero book. In fact, the plague is the only fantastic element. This sense of realism brings accessibility, and it is enhanced by subtle artwork that focuses on the physical and emotional reactions of the characters. And the focus on character is the true strength of the book. Despite his rather daunting quest, Yorick still obsesses over his lost girlfriend and offers a seemingly endless supply of quips and puns. There are brief but interesting explorations of ideas like feminism, war, and male/female relationships. These elements add up to a comic perfect for readers ready to move on to more complex and mature story lines.--Matthew L. Moffett, Northern Virginia Community College, Annandale
Copyright © Reed Business Information, a division of Reed Elsevier Inc. All rights reserved.