Items related to Batman: Detective, No. 27 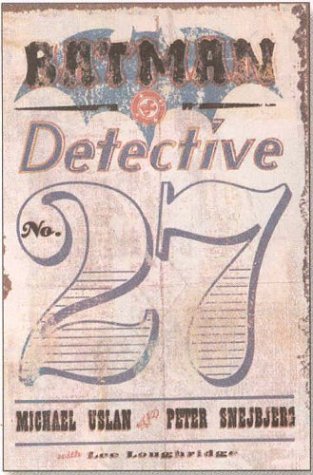 A riveting tale of murder and mystery that reimagines the origin and mythos of the Caped Crusader in the late 19th century. Ages 12+

Gr. 7-up. About the only thing left to do with the story of Batman's origins seems to be to set it to music, Beverly Hillbillies style ("Lemme tell ya all a story 'bout a kid named Bruce"), or locate its "real" beginning in the assassination of President Lincoln, which is what this wild and woolly yarn does. The assassination, you see, kicked off a plot to punish the North for the Civil War. The work of a secret society of die-hard Dixie-philes, the scheme would culminate in 1939 with the poisoning of a major northern city--D.C., N.Y.C., or Gotham City. Bouncing from 1865 to 1884 to 1929 (when Bruce Wayne's folks get iced, according to the familiar script) to 1939, and sometimes back again; incorporating a supporting cast of historical figures; and inserting up-to-date humor and patois with cheeky aplomb, this is a terrific suspense comedy, whose sharply drawn figures clash in scenes that unfurl in shades of single hues and radical changes in point of view. Ray Olson
Copyright © American Library Association. All rights reserved