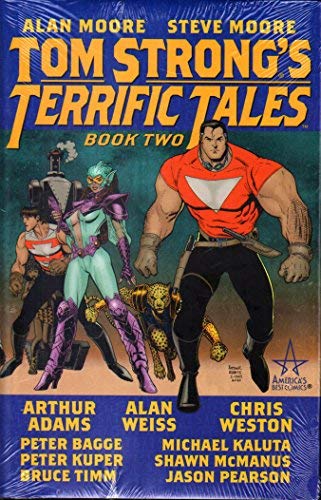 Alan Moore is perhaps best known for his groundbreaking writing on Watchmen, Batman; The Killing Joke and V for Vendetta. He is currently working on the ABC line of comics, which also includes Tomorrow Stories, Promethea, Top Ten and The League of Extraordinary Gentlemen (all published by Titan). Art Adams is a widely respected artist who has worked on many major titles, including Hellboy, Danger Girl, Gen 13, Tom Strong's Terrific Tales and X-Men.

When acclaimed writer Moore (Watchmen, 1987; From Hell, 2000) returned to mainstream comics in the late 1990s, he created several brand-new costumed adventurers, the most enduring of them "science hero" Tom Strong. Raised experimentally on a remote island and gifted with physical and mental perfection, Strong protects civilization with the aid of his similarly extraordinary family and companions. This collection reprints issues of the anthology comic book Tom Strong's Terrific Tales, which features stories that tend to be even goofier than Tom's customarily tongue-in-cheek exploits; for example, in this batch, a picture-book-style children's story entirely in verse and an adventure presented as a Saturday-morning cartoon. Moore's collaborators here are unconventional, too: Peter Kuper, for whom Moore wrote a script in Kuper's favored, wordless format; Batman animator Bruce Timm; and Peter Bagge, who depicts the Strongs as a hilariously dysfunctional family in the mode of the Bradleys in Bagge's Hate. Other scripts not by Moore but still a cut above standard superhero fare include flashback tales depicting Tom's childhood and time-traveling superheroine Jonni Future. Gordon Flagg
Copyright © American Library Association. All rights reserved