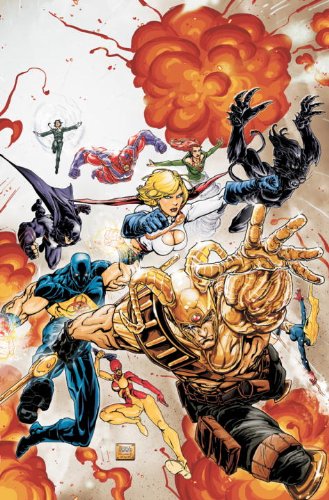 The Justice Society spin off group struggles to pull itself toward some semblance of order after the JSA's devastating split! New home base, new training methods, new villains - all bringing the JSA All-Stars face-to-"face" with one of their greatest villains again - for the first time! Join writer Matthew Sturges (JUSTICE SOCIETY, JACK OF FABLES) and artist Freddie Williams II (ROBIN) for a new chapter in the JSA legacy. The All-Stars survive their first major battle, but in the aftermath, one team member is missing without a trace. The mysterious Strike Force has that member captive, but there's someone else who wants the missing All-Star even worse than Strike Force does. Plus, the rift between Power Girl and Magog widens.

Matthew Sturges is the co-writer of Jack of Fables and House of Mystery. His other DC Universe works include Shadowpact, Blue Beetle and Justice Society of America. Freddie E. Williams II is an American comic book artist. Best known for his work on DC Comics' Robin, and for working almost entirely in Digital format.