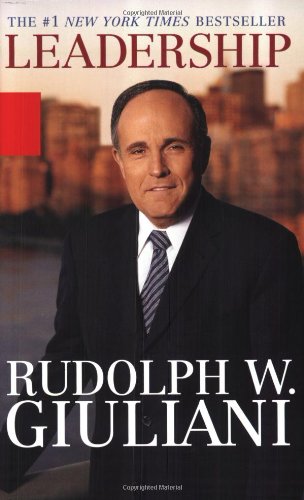 Rudolph W. Giuliani's management and decision-making skills have proven to be outstanding through his years as U.S. district attorney and his two terms as mayor of New York City. And on September 11th, 2001, Giuliani emerged as America's steady hand. In this program, Rudolph Giuliani shares with listeners the principles of leadership that guided him then, and throughout his career. He talks about how he was able to take control, show leadership, and make it clear to New Yorkers and the world that under his stewardship, they were in safe hands.

Rudolph Giuliani was born in 1944 in Brooklyn, NY. He attended Manhattan College and NYU Law School, graduating magna cum laude in 1968. He became the 107th mayor of New York City in 1993 and was re-elected in 1997. Leadership was first book. He is currently writing another book about his years as US Attorney, to be published by Miramax Books. He is the founder of Giuliani Partners, a consulting firm. He lives in Manhattan. Ken Kurson is a contributing editor and financial columnist at Esquire magazine and an editor-at-large for Money. He is the author of The Green Magazine Guide to Personal (1998). He lives outside New York City.

Through much of his tenure as mayor of New York City, Rudy Giuliani was a controversial figure whose personal weaknesses often overshadowed his political strengths. After September 11, however, the world focused on Giuliani's ability to lead with courage and controlled emotion. In LEADERSHIP, Giuliani demonstrates through vivid, practical examples how he used an aggressive, hands-on management style to deal with everything from petty crime to terrorism. Tony Roberts infuses Giuliani's words with grace and tempered emotion and revels in his take-charge style. Although, at times, Roberts sounds more like a performer than the former mayor/prosecutor, he succeeds in conveying Giuliani's confidence, tenacity, and courage. Giuliani reads the book's introduction with passion, making the listener wonder why he didn't read all of his inspiring words. D.J.S. © AudioFile 2003, Portland, Maine-- Copyright © AudioFile, Portland, Maine