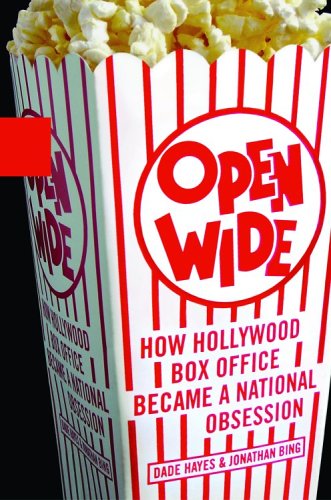 Opening weekend is a battle for the hearts and minds (and wallets) of American moviegoers. In Open Wide, Dade Hayes and Jonathan Bing expose the blockbuster factory that lies just beyond Hollywood's red carpet. They reveal how movies have become products of instantaneous mass consumption no more enduring than popcorn and soda. They shadow the actors, directors, producers, and studio executives, tracing the trail of blood, sweat, tears, and hundreds of millions at stake in a weekend at the multiplex.

Two Variety editors open readers' eyes wide to the inside story of Hollywood's relentless pursuit of fast maximum bucks in this engaging, informed look at the major films of the 2003 July Fourth weekend. Three big movies clashed at the box office from Wednesday, July 2, to Sunday, July 6: Terminator 3, Legally Blonde 2 and Sinbad. Hayes and Bing, writing smoothly together, consider each film primarily as a business product, bringing unprecedented attention to the massive marketing campaigns engineered by the respective studios (T3: Warner; LB2: MGM; Sinbad: DreamWorks). They follow Schwarzenegger through the publicity grind; sit with Mission Valley girls for a test screening of an early trailer for LB2; scrutinize the performance of DreamWorks marketing chief Terry Press at ShowWest in Las Vegas as she defends the hand-drawn Sinbad in the era of Shrek. Visits to myriad locations brighten the narrative (Technicolor's film processing plant; Schwarzenegger's vast office), while a smart history of blockbuster cinema, which the authors trace back past Jaws to Joseph E. Levine's Hercules and 1953's The Beast from 20,000 Fathoms, deepens it. In this excellent book that's a must read for anyone passionate about the film business or cultural trends, the authors have created an intricate, suspenseful and learned chronicle of the confluence of money and art.
Copyright © Reed Business Information, a division of Reed Elsevier Inc. All rights reserved.