Items related to The Cosmic Mind and Submanifest Order of Being

Chopra M.D., Deepak The Cosmic Mind and Submanifest Order of Being

The Cosmic Mind and Submanifest Order of Being 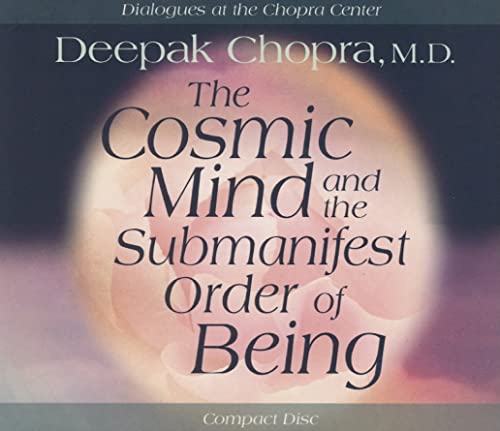 In this fascinating lecture, Deepak Chopra, M.D., discusses the connection between the brain and the mind, and the controversy over what that connection is. Chopra makes the point that consciousness is the ultimate reality, and it manifests both as the soul and universal spirit, which then slowly gives rise to both individual and cosmic intelligence. The intent of the soul is to just remember three things: to know; to keep manifesting as physical existence; and to experience love, or unity consciousness.

WAYNE DYER Dr. Wayne W. Dyer, affectionately called the "father of motivation" by his fans, is one of the most widely known and respected people in the field of self-empowerment. He became a well-known author with his bestselling book, Your Erroneous Zones, and has gone on to write many other self-help classics. Despite his childhood spent in orphanages and foster homes, Dr. Dyer, who has a doctorate in counseling psychotherapy, has overcome many obstacles to make his dreams come true. Today he spends much of his time showing others how to do the same. When he's not traveling the globe delivering his uplifting message, Wayne is writing from his home in Maui, Hawaii. DEEPAK CHOPRA Deepak Chopra has written more than twenty-five books, which have been translated into thirty-five languages. He is also the author of more than one hundred audio- and videotape series, including five critically acclaimed programs on public television. In 1999 Time magazine selected Dr. Chopra as one of the Top 100 Icons and Heroes of the Century, describing him as "the poet-prophet of alternative medicine." Dr. Chopra currently serves as CEO and founder of The Chopra Center for Well Being in La Jolla, California.

1. The Cosmic Mind and Submanifest Order of Being