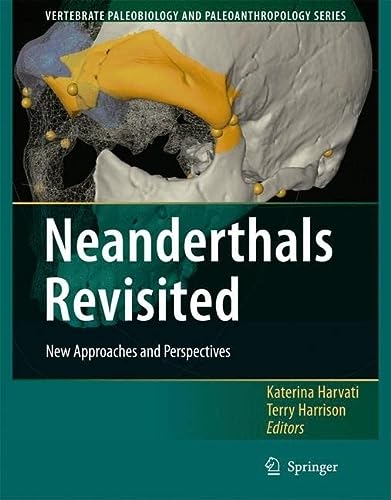 This volume presents the cutting-edge research of leading scientists, re-examining the major debates in Neanderthal research with the use of innovative methods and exciting new theoretical approaches. Coverage includes the re-evaluation of Neanderthal anatomy, inferred adaptations and habitual activities, developmental patterns, phylogenetic relationships, and the Neanderthal extinction; new methods include computer tomography, 3D geometric morphometrics, ancient DNA and bioenergetics. The book offers fresh insight into both Neanderthals and modern humans.

Katerina Harvati is senior researcher at the Max Planck Institute for Evolutionary Anthropology and adjunct Associate Professor at the Anthropology Department of the City University of New York Graduate School. Dr. Harvati is a paleoanthropologist specializing in Neanderthal evolution and modern human origins. Her broader research interests include primate and human evolution, evolutionary theory, life history and paleolithic archaeology. She has conducted fieldwork in Europe and Africa and is currently directing paleoanthropological research in Northern Greece. Her work has been published in the Proceedings of the National Academy of Sciences (USA), the Journal of Human Evolution, the American Journal of Physical Anthropology and elsewhere.

Terry Harrison is Professor of Anthropology and Director of the Center for the Study of Human Origins at New York University. His main research interests include all aspects of human and primate evolution. He has conducted paleontological field research in Europe, East Africa, and Asia, and he is currently directing research at the early hominin locality of Laetoli in Tanzania. He has published extensively on the evolutionary relationships and paleobiology of Miocene hominoids, East African vertebrate paleontology, and comparative anatomy. He is the editor of Neogene Paleontology of the Manonga Valley, Tanzania (Plenum Press).

"Neanderthals Revisited deals exclusively with the biological issues ... . Readers will gain an appreciation of the diversity of scientific perspectives on the Neanderthals ... . The result is an excellent and extremely useful compendium of approaches and perspectives, including some very novel ones. ... I consider it a must read for anyone interested in any aspect of hominin evolution and believe it will stand for many years as the fundamental reference for the role of the Neandertals in our evolutionary history." Fred H. Smith, Journal of Mammalian Evolution, 2008

"At the beginning of 2005, Katerina Harvati and Terry Harrison hosted a conference entitled ‘Neanderthals Revisited: New Approaches and Perspectives,’ which was supported by the Center for the Study of Human Origins ... . The papers run the gamut of research themes and styles, ranging from a study of the Neanderthal hand to one that claims to have found evidence of selection acting on mtDNA. ... a rich source of information and inspiration for students, researchers, and teachers." Bernard Wood, American Journal of Physical Anthropology, 2008

"This volume presents a stimulating survey of current perspectives on Neanderthal issues, ranging from species concepts and systematics, to dental morphology and developmental studies, to molecular approaches and morphological analyses. ... To sum up, this volume is a very worthwhile addition to one’s bookshelf, presenting a diverse collection of current and stimulating research papers." Kevin L. Kuykendall, PaleoAnthropology, 2009