Items related to Triumvirate: The Story of the Unlikely Alliance That...

Chadwick, Bruce Triumvirate: The Story of the Unlikely Alliance That Saved the Constitution and United the Nation

Triumvirate: The Story of the Unlikely Alliance That Saved the Constitution and United the Nation 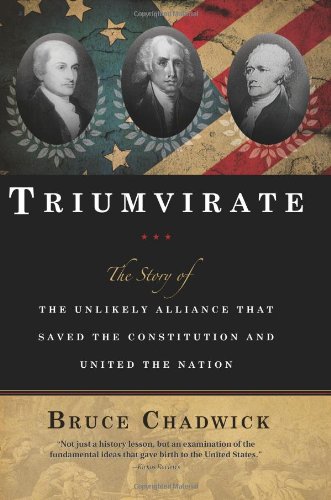 From noted historian Bruce Chadwick—acclaimed as "a writer incapable of dull storytelling"—Triumvirate is the dramatic story of the uniting of a nation and the unlikely alliance at the heart of it all.

When the smoke cleared from Revolutionary War battlefields, independent-minded Americans turned against each other.

Strong individuals with wildly different personalities, Alexander Hamilton, James Madison, and John Jay joined forces to convince wary Americans and thirteen headstrong states to unite as one. Together they wrote the startlingly original Federalist Papers not as an exercise in governmental philosophy, but instead aimed at overcoming the common man's fears. Their relentless efforts laid the groundwork for ratifying the Constitution against rampant opposition.

United by an intense love for their emerging nation, Hamilton, Madison, and Jay forged its legacy in pen and ink.

"Dr. Chadwick tells an exciting story. His analysis will provoke further debate about this momentous period in American history."
Dr. Paul Clemens, the Chairman of the Rutgers University Department of History

PRAISE FOR TRIUMVIRATE
"The author effectively details the fi erce debates in Massachusetts, Virginia, and New York and the serpentine political machinations that helped bring about the birth of a nation...Not just a history lesson, but an examination of the fundamental ideas that gave birth to the United States."
Kirkus Reviews

"If you think you know how America's founding document came about, think again. In this remarkable new book, Bruce Chadwick reminds us of the three extraordinary men who worked state by state, individual by individual, to ensure passage of the Constitution. It's a fascinating tale, well told."
Terry Golway, author of Washington's General and Ronald Reagan's America

"Chadwick vividly brings to life a time of turmoil and hope in a book that should endure as a fi ne example of historical journalism."
Willard Sterne Randall, author of George Washington: A Life

Bruce Chadwick is a former journalist and author of seven works of history including 1858, The First American Army, George Washington's War, and The General and Mrs. Washington. He lectures in American history at Rutgers University and also teaches writing at New Jersey City University.

Excerpt from Chapter One: A Fight Brews

Aboard a sloop anchored in the Hudson River at Albany, New York, evening, late October 1787.

The slow arrival of the night cast a dusky blanket over the waters of the Hudson River in New York. The lush forests that lined the shores of the river, blindingly beautiful in the autumn when the leaves changed from green into all the blazing colors of a painter's palette, were quiet and still. On board a single-masted sloop moored in the Hudson at Albany, near the mills of his father-in-law, Philip Schuyler, the Revolutionary War general, the light of a candle shone from the window of a cabin.

Inside the dimly lit cabin, Alexander Hamilton began to write quickly across paper that covered a wide wooden desk. Hamilton, thirty-two, had been in Albany on business before the state Supreme Court and to see Schuyler, whose daughter Eliza he had married in 1780. The sandy-haired Hamilton, a gifted political theorist, author, and speaker, was working on the first of what would be eighty-five essays of support for the newly approved U.S. Constitution, the Federalist, that would be published in New York newspapers, and others throughout the nation, during the next eight months, just in time for the delegates to the state conventions called to ratify the Constitution to read them.

Hamilton felt comfortable writing quickly. He had spent nearly five years in the American Revolution as the chief of staff to Commander in Chief George Washington; among his many responsibilities was the production of thousands of pages of letters, reports, and orders. Then, and now, the loquacious, personable Hamilton cut quite a figure. He was about 5 feet 7 inches in height and thin, but stood and walked ramrod straight, chin always tilted up slightly, to give the appearance of a taller man. Hamilton had a thin nose and a square chin that in later years might be called a boxer's jaw. His fair-complexioned face was highlighted by a slight smile and dazzling, clear blue eyes that attracted the attention of everyone who met him. He was always well dressed, favoring the most expensive jackets, breeches, and stockings and was sometimes attended by a hairdresser. The former army colonel and congressman was a spry man with a sophisticated demeanor. A man who knew him, Fisher Ames, marveled that he possessed "a degree of refinement and grace which I never witnessed in any other man...it is impossible to conceive a loftier portion of easy, graceful, and polished movements than were exhibited in him."

With the outdoor light dying slowly and the sounds of the river and the port town in the background, he wrote to his countrymen in The Federalist No. 1, "After an unequivocal experience of the inefficacy of the subsisting Federal Convention, you are called upon to deliberate on a new Constitution for the United States of America. The subject speaks of its importance comprehending in its consequences nothing less than the existence of the Union, the safety and welfare of the parts of which it is composed, the fate of an empire, in many respects the most interesting in the world "

Hamilton worked all night and throughout the next days on the essay, one of the many he would write as his contribution with John Jay of New York, the U.S. secretary for foreign affairs, and James Madison, the congressman from Virginia. The essays had to be written quickly, and published as soon as possible, because the Anti-Federalists, the angry group arrayed against the passage of the Constitution, had already managed to publish several stinging columns attacking it in the New York newspapers after succeeding in obtaining publication of similar essays in cities throughout the country.

All writers have different idiosyncrasies that they employ in order to gather their thoughts. Some look out windows and others stare at the paper on their desk. The fidgety Hamilton liked to walk back and forth, whether in his New York City home, his old army quarters, or on ships. He paced on the deck of the ship that night, and throughout the following days before the vessel reached New York City. As he did so, Hamilton had to be astonished by the spectacular scenery the sloop passed on its way south. The wide river's beauty had astonished Henry Hudson, the explorer for whom the waterway was named, and the hundreds of thousands of people who had traveled on it or lived on its banks over the next two hundred years.

1. Triumvirate: The Story of the Unlikely Alliance That Saved the Constitution and United the Nation

2. Triumvirate: The Story of the Unlikely Alliance That Saved the Constitution and United the Nation

3. Triumvirate: The Story of the Unlikely Alliance That Saved the Constitution and United the Nation Chadwick, Bruce