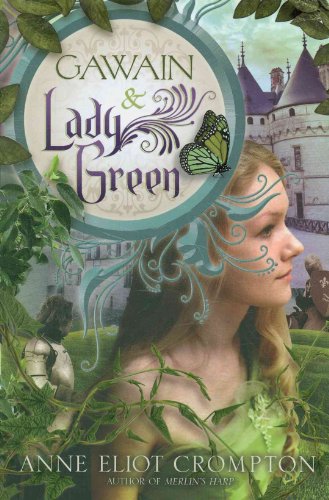 Gwyneth wasn't supposed to fall in love with Gawain. Not like this. Gawain was the May King-a sacrifice offered to the Goddess for a bountiful harvest in return. Gwyneth knows this. His fate has been decided by powers beyond her control. But the warmth of his touch and the taste of his lips have blurred the lines of what she knows to be true. Now Gwyneth is willing to risk everything to keep Gawain alive, even if it means losing him forever...

"A famous knight must rely on a woman to comprehend the chivalric virtues in this subversive and deliciously witty feminist retelling of Sir Gawain and the Green Knight."
-Publisher's Weekly

"The book is unique in its presentation of Lady Green as a strong female character, and many teens will identify with the choice she made for love."
-School Library Journal

"In her fine reworking of the medieval poem Sir Gawain and the Green Knight, Crompton explores honesty, promise-keeping, honor, and the power of women. Recommended."
-Library Journal

Anne Eliot Crompton grew up in a college town in the 1940s, a time when women's roles in myth were less acknowledged than today. When she married and moved to the country to raise children and animals, she realized how much heavy lifting had been done by women throughout human history. Part of her life's work has been to shine light on their immense contribution to the human story. Having come full circle, she now lives in a college town in Vermont.

A great white horse stood hidden, almost invisible, on the edge of the oak grove. Its dark young rider looked across a stream to the Fair-Field. In the midst a maypole reared to the spring sky, all a-flutter with strung leaves and flowers.

So! the young man thought, or tried to think. Hunger and fatigue numbed his mind. So this must be May Day. Spring.

The endless winter he had ridden through-at first provisioned, and now starving; at first in company, and now alone-the terrible winter was over.

A crowd of merry savages milled about the maypole: uncouth men armed only with staves, bright-gowned women with flowers in their braids. Yapping children and dogs sped from one small fire to the next, from one loaded table to the next.

The young knight's starved stomach cried, God's blessed eyes! Meat on the spit! Heart leaped high, with all the proud confidence that was his heritage. Not for a moment did he hesitate.

Straightway he clapped heels to horse. Through the shallow, stony stream they splashed, up the bank, onto the Fair-Field. He steered straight for the nearest table.
According to God's Natural Law this bumpkin crowd should give way promptly before a mounted knight. He could wolf down half a pig haunch before they rounded up their chief, druid or headman, to deal with him. And by then he would have his wits and manners back in order. But at this moment the smell of roasting meat overwhelmed all protocol, all courtesy. It was not as though he dealt with equals here.

But this crowd gave him no way.

Warrior, his white charger, pushed narrowly between two arguing women. A startled fellow wheeled around and grabbed for his rein.

"Make way!" The hungry young knight shouted warning. "Ho, hey, give way there!" The rasp of his own voice startled him. He had not spoken in many a day. "What are you folk? Stand back!-God's teeth!"

The crowd closed in. He clapped hand to sword hilt.

Hands seized Warrior's bridle. Hands grabbed arm, foot, scab­bard, and yanked. He was on the ground, men piled heavy on top. Boots stamped before his eyes. Above, hunters halloed.

Hooves tramped around his head as the crowd pushed and pulled at Warrior. He heard the sword screech out of his scabbard. Ripped off, his helmet rolled among feet.
The weight of men lifted off him. Now the sword would come down. That I should die by the hands of savages!

Hands seized him and hauled him to his feet. Maybe not yet?

Strong-twined rope pulled his arms tight. What do they want?

Move. Walk. Not so fast, the way I'm trussed!...This way. The maypole.

Horns shouted. A screaming wind blew away hearing; bagpipes, too close. Now the crowd opened a path to the maypole; and all along the path merry eyes beamed and orange-green teeth gleamed through beards. Near fluttered wind-waved strung flowers and leaves. High rose the maypole into spring-morning sky. Now we're here, what-
Horns and pipes fell abruptly silent. The jabbering mob fell silent.

At the maypole's foot they let him go. They stood back and left him bruised, swaying in his bonds, dizzy with hunger, confused past surprise.

Three faces confronted him. A white-haired druid held with both hands a crown of flowers high over the head of a stiff-faced, pale young man. A girl held the man's hand, a sturdy peasant girl, clad all in green, her rich red hair already flower-crowned. The three stared, astonished, at the dark young man reeling in his bonds. Slowly, the girl smiled.
Her smile lit her plain face, and the fluttering leaf-strings above, and the spring-green air all about. Her green gown flowed to her ankles, held at the hips by a green lace girdle. Gown and girdle, hands, arms, and neck were looped or studded with green- gold gems.
She smiled. She let go of the stiff-faced fellow's hand. The white-bearded druid nodded one deep, slow nod.

Two women burst from the crowd. Joyfully, they grabbed the  stiff-faced fellow by the arms and pulled him away backward. The crowd swallowed him up.

The druid stepped up to the captive. Keen old blue eyes met mysti­fied gray young eyes. Trembling, upraised hands came down. Like an enemy's ax, the crown of flowers descended upon the captive's head.

Air roared again as drums rumbled and pipes wailed. Knives sliced the knight's bonds.
The red-haired girl seized his hand and pulled him into a jigging dance. Hungered and aching, he could hardly keep up. He waddled after her like a leashed dancing bear.

Drums and pipes merged rhythms. The girl leaped, the knight lumbered. Dancers joined them around the maypole. The blowing maypole ribbons tightened as they were caught in dancers' hands, shortened as they were twined together. Out in the field the whole crowd danced. The Fair-Field danced. Earth danced.

The knight thought, If I can but go along...

As a young child he had danced around maypoles. He began to master the step. The girl grinned over her shoulder and squeezed his hand harder. Jigging became easier than stumbling. Heart took on drum-rhythm. Pipes screeched in the blood. The girl's loose red hair fanned his face. Something jogged down over his eyes so that he danced blind; the flower crown. A friendly hand reached from behind and straightened it. But it inched down again and flopped about his neck.

He had danced in place for a while before the girl stopped him, smiling, hands on his shoulders. Music and dance had paused. The maypole stood wrapped, bright against mild sky. A band of wild,  masked men all in green now cavorted around it, waving hawthorn branches and tumbling. The crowd applauded.

Hazy, the captive found himself leaning against a table. A hand held a mug of ale under his nose. He seized it and drained the contents.

Then he sneezed foam and grabbed at the table for support. A close-by voice asked a question. Though soft, the voice was uncouth, northernly accented, the words hard to understand. "What?" With the back of his hands he rubbed away foam and sweat.
The flower-crowned girl stood close.

Now he saw her clear; under all the green finery and frip-frap, a vigorous, full body; work-roughened, square hands; hard gray eyes, wide now with wonder-she might never have seen his like before.

And he had never seen her like before quite like this, face to face and equal. Softly, now; he had come into a foreign world here, almost as if he had entered Fairyland. In Fairyland there was no telling what or who it was that you saw. A toad could be a prince, a wild tribal girl could be...

Very courteously he asked her, "Did you speak to me, Lady Green?"

Laughter flashed across her peasant face. She spoke again. Listening attentively, he barely understood her.

"My name is Gawain, Lady. I am Sir Gawain of the Round Table."

"Sir Gawain. Aha. Are you a knight, Sir Gawain of the Round Table?"

"Surely you know-" He checked himself. "Yes, Lady Green, I am a King's Companion."  And nephew-but no need to say that.

A face butted in between them. For a dazed moment, Gawain  thought it the face of an ancient white goat. In a clearer accent than the girl's it said, "I have heard of you, Sir Gawain, King's Companion." It was the old druid, the flower-crowner. "What do you here, with us?"

"I..." How best to put this? Ale fought with exhaustion on Gawain's tongue. "My king sent me here to...see the north country."

"No, Father." Very polite. "Three of us came, with squires and horses and packhorses bearing gifts. We came as emissaries."

"Hah. Gladly would we see these emissaries and these gifts. Where are they?"