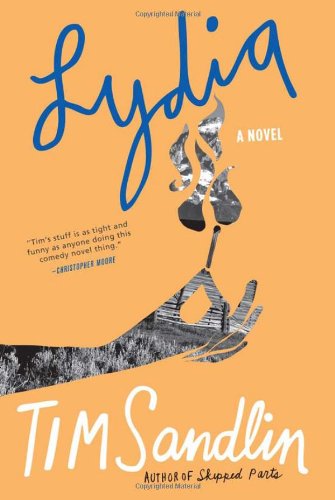 "Sandlin understands that the best black comedy is only a tiny slip away from despair, and he handles this walk without a misstep."
-Dallas Morning News

Managing the Virgin Birth Home for Unwed Mothers means the women in Sam Callahan's life keep his world interesting. But it's his family members that really take the cake. His daughter may be having a nervous breakdown, and his mother's just out of prison for attempting to poison the president's dog. And when they hit the road with a geriatric, an adoptive son trying to discover his parentage, and an enraged psychopath on their tails, all hell may break loose.

Fifteen years ago, Tim Sandlin concluded his "Gro-Vont" trilogy, a string of books that included a New York Times Notable Book and earned such accolades as "funny and compelling" (LA Times), "zany" (Cosmo), and "dazzling and moving" (New York Times). But some characters call a writer back.

Welcome to the ribald, rollicking, and sometimes peculiar world of Tim Sandlin's GroVont, Wyoming, where family is always paramount, no matter how strange.

"I don't understand why your mother was in prison in the first place," Eden said. "I heard she was a feminist force for justice in America."

I glanced in the rearview mirror at Gilia, staring out the window at the red cliffs along the river, pretending not to listen. It would be just like her to feed Eden that feminist force for justice in America line. Although we'd been together almost ten years, I still had no clue as to when Gilia was being sarcastic. It seemed like an important thing to know.

After a moment of semi-stunned silence, Eden said, "Now I see why you're so squirrelly."

"Able storytelling and an engaging cast of dysfunctional modern American pilgrims animate this winning tale of the road...Sandlin fashions a convincing tale of redemption."
-Publishers Weekly

Reviewers have variously compared Tim Sandlin to Jack Kerouac, Tom Robbins, Larry McMurtry, Joseph Heller, John Irving, Kurt Vonnegut, Carl Hiaasen, and a few other writers you've probably heard of. He has published nine novels and a book of columns. He wrote eleven screenplays for hire, two of which have been made into movies. He used to write reviews for the New York Times Book Review but was fired for excessive niceness. He lives with his family in Jackson, Wyoming, where he is director of the Jackson Hole Writers Conference. His "Sandlinistas" follow him at www.timsandlin.com.

Reviewers have variously compared Tim Sandlin to Jack Kerouac, Tom Robbins, Larry McMurtry, John Irving, Kurt Vonnegut, and a few other writers you've probably heard of. He has published nine novels and a book of columns. He wrote eleven screenplays for hire, two of which have been made into movies. He lives with his family in Jackson, Wyoming, where he is director of the Jackson Hole Writers Conference. His "Sandlinistas" follow him at www.timsandlin.com.

""A wonderfully woven tapestry of stories, this gem of a novel is as audacious as it is sentimental and ends on a shocking note that no one could have predicted." - Booklist, STARRED review" - Booklist

"Sandlin's prose is sharp and witty. He writes with a depth of feeling that illustrates his love for his characters...Readers will find plenty of adventure, drama, and dark comedy, as well as wonderful turns of phrase, destined to be repeated and savored, or stolen for personal use. An excellent discovery for backlist reads." - Library Journal

""It's ultimately uplifting, adroitly chronicling the ways we seek to transcend our fears... [Lydia's epiphany is] immensely satisfying to witness. Better still, the transformation isn't rendered with a heavy hand. For a novel that shouts its drollery from the rooftops, the insights 'Lydia' offers are brilliantly understated."" - The New York Times

"It takes a while to wrangle a book out of Tim Sandlin, but it's always worth it." - The Denver Post

""Sandlin sketches his characters with a touch of the cartoonist's hyperbole. This has a nice effect. It both reveals and tempers their flaws, making Sam and his crew human and likeable."" - The Wyoming Tribune-Eagle

"If there's an author out there creating more memorable comic characters than Tim Sandlin, that author is keeping a very low profile. Sandlin is back, returning readers to his eccentric, rollicking, ribald and ultimately lovable family in "Lydia," a new installment in what had been a trilogy of books about a semifunctional family in GroVont, Wyo." - The St. Louis Post-Dispatch

"Sandlin fans have waited fifteen years for this book and they won't be disappointed. With his quirky, unpredictable writing style Sandlin once again delights readers with his warped view of the cosmos and those who live in it. Readers will love the off beat characters and zany situations they get themselves into. Sandlin's ability to take and absurd situation and make it plausible is incredible." - Debbie's Book Bag

"I honestly laughed until tears rolled down my face. This book tugs on all the emotional strings - humor, anger, regret, love, hate, forgiveness and triumph - to name a few." - Michelle's Book Blog

"Sandlin's style is wry and clever. Like Kurt Vonnegut, he writes out of a genuine desire to understand humanity; like Tom Robbins, he attempts a sincere articulation of the female plight." - New West Books & Writers