Items related to The Shift Age 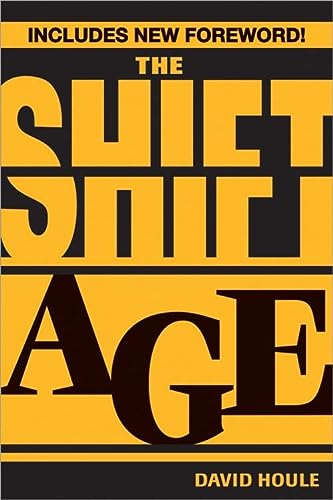 The Shift Age is about humanity's new ere. As the Information Age gives way to the Shift Age, we are entering a time of
transformation and change that offers both great risk and incredible opportunity. Originally published in 2007, David Houle
identifies and explains the dynamics and forces that already have reshaped and will continue to reshape our world for the next
20 years. He comments from the front lines of the Shift Age on issues and topics that affect our lives. We have entered the final,
global stage of humanity's cultural, social and economic evolutionary journey: The Shift Age

David Houle is a futurist, strategist and keynote speaker. Houle is consistently ranked as one of the top futurists and futurist keynote speakers on the major search engines. Houle won a Speaker of the Year award from Vistage International, the leading organization of CEOs in the world. He is often called the "CEOs' futurist" having spoken to or advised 2,000+ CEOs and business owners in the past four years.

THREE YEARS AGO I set out to write a book about the future; you hold the result in your hands. The goal was to present a clear picture of the current dynamics shaping our world and to then project them forward to suggest what may lie ahead.

The thesis of Part of I of this book is that humanity is entering a new age, the Shift Age, which will be a time of great transformation for us all. As this thesis took shape, an avalanche of corroborating evidence confirmed my belief. Developments in many areas of human endeavor clearly pointed the way.

While the longer trend lines needed more research, the more immediate manifestations of these trends were everywhere. The desire to comment on them was the genesis of my futurist blog (http://www.evolutionshift.com) that has as its tagline “A Future Look at Today.” Two or three times a week I post columns that discuss news, events, and trends. Launched in early 2006, this blog quickly developed a loyal readership. Now, some 200 posts later, many of these columns are included in Part II of this book, grouped by general subject matter into chapters. These groupings and the editing they have undergone should make them fresh to even the most regular readers of the Evolution Shift blog. They provide commentary on the Shift Age, reporting from the front lines, as we move into a time of great change, much risk, and the promise of a new golden era for humanity.

We live in an age of information and media overload, which influences how we read books. Over the past three years I have had discussions with numerous people about how they read the books they buy. Many people were frustrated they were not able to read more because of the other demands on their time. Many admitted they bought more books than they read. Others would start long books but never finish them because so much of their reading had to be done in short bursts that the thread of the book was lost. I often heard that books need to be written so they can be consumed in the staccato rhythm of an “always on” life. I took these comments into account in writing this book. Most chapters are short, and the longer chapters are comprised of short chunks. Most of the columns in Part II can be read in 5 to 10 minutes. I hope you make the commitment to read the entire book. Know that it has been structured so that you can.

Finally, this will be the first of several books about the Shift Age and the future. I plan to expand upon and go deeper into some of the bigger concepts and trends of this new age with a follow-up Shift Age book. Then I plan to have a book published on the 2010-2020 decade, which could well be one of the single most transformative decades in human history. There might also be a third book that looks at a probable monumental transformation in human consciousness that could well usher humanity into a new golden age. These books, as they are about the future, may well be published in new ways and formats. So stay tuned, as we face the future together.