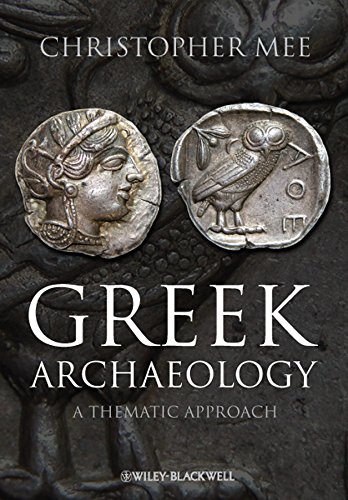 Christopher Mee presents an extensive examination of the material culture of the Greek world from its Neolithic roots in 7000 B.C. to the close of the Hellenistic period in 146 B.C.

Sifting through the remains of the ancient landscapes of Greece has revealed -- and continues to uncover -- a wealth of archaeological treasures. Greek Archaeology: A Thematic Approach presents an up-to-date synthesis of the material culture of the Greek world from its earliest Neolithic roots in 7000 B.C. to the rise of Roman influence that marked the close of the Hellenistic period in 146 B.C. To provide a long term perspective on the processes of continuity and change throughout the Greek world, chapters are arranged thematically, while focusing on various aspects of Greek culture in a chronological manner. Themes covered include settlement, monumental architecture, houses, agriculture, technology, trade, warfare, burial and religion. Chapters are supplemented with an extensive selection of illustrations for accessibility and to enhance clarity. This rich and rewarding journey into the material culture of the past will help shape our understanding of one of the greatest civilizations the world has ever known.

Christopher Mee is Professor of Classical Archaeology at the University of Liverpool. Formerly Assistant Director of the British School at Athens, Mee specializes in the prehistory of Greece and has directed excavation and survey projects in Lakonia and on the Methana peninsula. He is the author of Rhodes in the Bronze Age: An Archaeological Survey (1982), and co-author of A Private Place: Death in Prehistoric Greece (with William Cavanagh, 1998) and Greece: An Oxford Archaeological Guide (with Antony Spawforth, 2001).

Book Description 2011. Condition: NEW. 9781405167345 This listing is a new book, a title currently in-print which we order directly and immediately from the publisher. For all enquiries, please contact Herb Tandree Philosophy Books directly - customer service is our primary goal. Seller Inventory # HTANDREE0778537