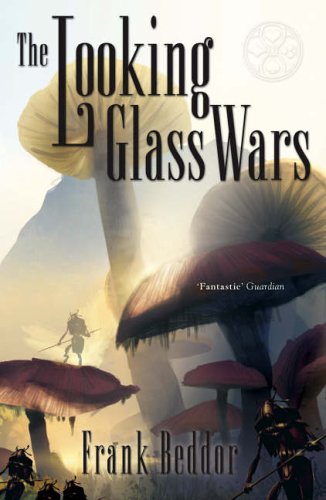 Alyss, born in Wonderland, is destined to be a warrior queen. After a bloody coup topples the Heart regime, Alyss is exiled to another world entirely, where she is adopted into a new family, renamed Alice and befriended by Lewis Carroll. At age 20 she returns to Wonderland to battle Redd and lead Wonderland into its next golden age of imagination.

Frank Beddor runs Automatic Pictures, and produced the hit film There's Something About Mary for 20th Century Fox. He hails from Minneapolis, and attended the University of Utah, where he trained for the US Ski Team. One of the world's foremost freestyle skiers, he won the World Championship twice. Frank began his entertainment career doing endorsements and commercials before performing the skiing stunts for the comedy Hot Dog: The Movie. Trading the alpine slopes for the Hollywood hills, Frank has acted alongside Emillo Estevez, Carrie Fisher, Chris Penn, Jennifer Tilly and Kevin Dillon.

THE QUEENDOM had been enjoying a tentative peace ever since the time, twelve years earlier, when unbridled bloodshed spattered the doorstep of every Wonderlander. The civil war hadn't been the longest in all of recorded history, but no doubt it was one of the bloodiest. Those who had entered a little too quickly into the carnage and destruction had trouble adapting to life during peacetime. When hostilities ceased, they ran amok on the streets of Wonderland's capital city, looting and pillaging Wondertropolis until Queen Genevieve had them rounded up and shipped off to the Crystal Mines—a spiderweb-like network of tunnels carved in a far-off mountainside, where those unwilling to abide by the laws of decent society lived in windowless dormitories and labored to excavate crystal from the unforgiving mountain. Even after these people were taken off the streets, the peace that settled on Wonderland was nothing like that which had existed before the war. A third of Wondertropolis' quartz-like buildings had to be rebuilt. The smooth turquoise amphitheater had suffered damage in an air raid, as had the public works towers and spires sporting fiery, reflective pyrite skin. But the scars of war are not always visible. Although Queen Genevieve ruled her queendom judiciously, with care for the well-being of her people, the monarchy had forever been weakened. The coalition of Diamond, Club, and Spade dynasties that made up Parliament were falling apart. The matriarchs of the families were jealous of Genevieve's power. Each thought she could rule Wonderland better then the queen. Each watched and waited for an opportunity to wrest control from her, keeping a none-too-friendly eye on the other families in case they happened to make a move first.

Entertaining no thoughts of war, Princess Alyss Heart stood on the balcony of Heart Palace with her mother, Queen Genevieve. The city was in the midst of a jubilant gala. From the Everlasting Forest to the Valley of Mushrooms, Wonderlanders had come to celebrate the seventh birthday of their future queen, who, as it happened, was bored out of her wits. Alyss knew she could do a lot worse than be Queen of Wonderland, but even a future monarch doesn't always want to do what she is supposed to do—like site through hours of pageantry. She would rather have hidden with her friend Dodge in one of the palace towers, dropping jollyjellies from an open window and watching them splat on the guards below. Dodge wouldn't like the jollyjelly bit—guardsmen deserved better treatment, he'd say—but that would only make it more fun.

Where was Dodge anyway? She hadn't seen him all morning, and it wasn't nice to avoid the birthday girl on her birthday. She searched for him among the Wonderlanders gathered to watch the Inventors' Parade on the cobbled lane below. No sign of him. He was probably off doing something fun; whatever it was had to be more fun than being stuck here, forced to watch Wonderlanders show off their silly contraptions. Bibwit Harte, the royal tutor, had explained to her that most of Wonderland took pride in the Inventors' Parade, the one time every year when citizens flaunted their skills and ingenuity before the queen. If Genevieve saw something in the parade that she thought particularly good, she would send it into the Heart Crystal—a thirty-three-foot-tall, fifty-two-foot-wide shimmering crystal on the palace grounds, the power source for all creation. Whatever passed into the crystal went out into the universe to inspire imaginations in other worlds. If a Wonderlander bounced in front of Queen Genevieve on a spring-operated stick with handlebars and footrests and she passed this curious invention into the crystal, before long, in one civilization or another, a pogo stick would be invented.

Still, Alyss wondered, what was the big deal? Having to stand here until her feet hurt—it was punishment.

"I wish Father was here."

"He's due back form Boarderland at any moment," said Queen Genevieve. "But since the rest of Wonderland is here, I suggest you try to enjoy yourself for their sake. That's interesting, don't you think?"

They watched as a man floated down from the sky with what looked like a hollow mushroom cap strapped to his back.

And with that, the mushroom contraption was suddenly covered with fur, its inventor falling to the ground with a thump.

"He's late," Alyss said. "He promised he'd be here. I don't understand why he had to make a trip so close to my birthday."

There were reasons, as the queen well knew. Intelligence had indicated that they may have already waited too long. Unconfirmed reports suggested Redd was growing more powerful, outfitting her troops for an attack, and Genevieve was no longer sure that her military could provide adequate defense. She was as keen as Alyss for King Nolan's return, but she had determined to enjoy the day's festivities.

"Ooh, look at that," she said, pointing at a woman wiggling as she walked so as to keep a large hoop swinging round and round her waist." That looks diverting."

"It'd be more fun if it had fountains of water coming out of it," Alyss said, and immediately the hoop was spurting water from tiny holes all along its surface, the surprised inventor still wiggling to keep it swinging round and round.

"Birthday or not, Alyss," Queen Genevieve said, "I don't think it's nice to show off."

The fur on the first-ever parachute vanished. The fountains of water on the newly invented hula hoop dried up. The power of Alyss' imagination had made them appear and disappear. Imagination was an important part of life in Wonderland, and Alyss had the most powerful imagination ever seen in a seven year-old Wonderlander. But as with any formidable talent, Alyss' imagination could be used for good or ill, and the queen saw mild reasons for concern. Hardly one revolution of the Thurmite moon had passed since Alyss' last incident: Impatient with young Jack of Diamonds for some childish indiscretion, she's imagined his trousers filled with slick, squiggling gwormmies. Jack of Diamonds had said he "felt something funny," looked down, and saw that his trousers were moving, alive. He'd been having nightmares ever since. Alyss claimed not to have done it on purpose, which may or may not have been true, Genevieve couldn't tell. Alyss didn't yet have full control of her imaginative powers, but the girl would say anything to get out of trouble.

"You will be the strongest queen yet," she told her daughter. "Your imagination will be the crowning achievement of the land. But Alyss, you must work hard to develop it according to the guiding principles of the Heart dynasty—love, justice, and duty to the people. An undisciplined imagination is worse than no imagination at all. It can do more harm. Remember what happened to your aunt Redd."

"I know," Alyss said sulkily. She had never met her aunt Redd, but she'd heard storied about the woman for as long as she could remember. She didn't bother trying to understand it all; it was history—boring boring boring. But she knew that to be like her aunt Redd wasn't good.

"Now that's enough lecturing for one princess' birthday," Queen Genevieve said. She clapped her hands and the parachute and hula hoop passed into the Heart Crystal, much to the joy of their inventors.

An empty pair of King Nolan's boots floated out from behind the balcony door and began to dance in front of the brooding princess.

Queen Genevieve, watching yet another extraordinary display of her daughter's imagination, said, "Alyss."

Something in her tone made the girl stop what she was doing. The boots thudded to the ground, still.

It was both a warning and an expression of hope: Queen Genevieve, aware of the dark forces at work somewhere in the wastes of the Chessboard Desert, knew that joy and happiness didn't last forever in Wonderland; sooner or later the queendom would come under attack, and it would require all of Alyss' imaginative powers—and then some—to ensure its survival.