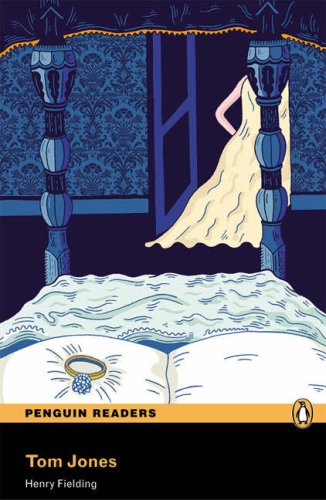 Classic / British English When Mr Allworthy finds a baby boy in his bed, he decides to keep him and gives him the name Tom Jones. But Tom can't keep out of trouble, and is sent away. Follow Tom's travels and read of his adventures along the roads of eighteenth-century England.

Tom Jones isn't a bad guy, but boys just want to have fun. Nearly two and a half centuries after its publication, the adventures of the rambunctious and randy Tom Jones still makes for great reading. I'm not in the habit of using words like bawdy or rollicking, but if you look them up in the dictionary, you should see a picture of this book.

A milestone in the history of the English novel, Tom Jones draws readers into a world teeming with memorable characters. This epic of everyday life chronicles the adventures of Tome Jones, who was abandoned as an infant and grows into a lusty, imprudent young man. Promising to mend his ways, Tom competes with his abusive rival for the affections of a wealthy squire's daughter, and learns the truth about his identity, in this discerning comedy of human foibles and self-discovery.

Book Description Penguin, 2008. Condition: Good. 2nd. Ships from Reno, NV. Shows some signs of wear, and may have some markings on the inside. Seller Inventory # GRP92981595