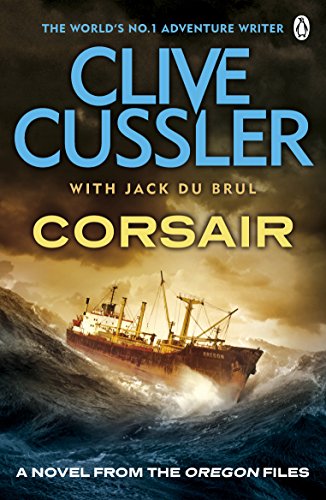 Juan Cabrillo returns in Clive Cussler's Corsair, the sixth novel in the Oregon Files. Off the coast of Somalia a battered, old freighter is boarded by pirates whose sights are set on a hefty ransom . . But these pirates have made a mistake. For this rusting freighter is none other than Juan Cabrillo's secretive, state-of-the-art fighting ship Oregon. And Cabrillo is about to turn the tables on a deadly Somali pirate captain. One spectacular battle later and Cabrillo finds himself embroiled in an even tougher assignment. The US Secretary of State's plane has crashed on its way to a summit in Libya - and she is missing. Cabrillo is the only one who can find her. But his search quickly involves a lost ancient jewel and a murderous plot by terrorists intent on plunging the world into chaos ... The number-one bestseller Clive Cussler, author of the thrilling Dirk Pitt novels Arctic Drift and Treasure of Khan, and co-author Jack Du Brul pit hero Juan Cabrillo and his crew against pirates and terrorists in the sixth novel in the Oregon Files adventure series, Corsair. Praise for Clive Cussler: 'Cussler is hard to beat' Daily Mail

Clive Cussler (Author) Clive Cussler is the author and co-author of a great number of international bestsellers, including the famous Dirk Pitt (R) adventures, such as Odessa Sea; the NUMA (R) Files adventures, most recently Nighthawk; the Oregon Files, such as Typhoon Fury; the Isaac Bell historical thrillers, which began with The Chase; and the recent Fargo Adventures which lastly included The Romanov Ransom. He lives in Arizona. Jack du Brul (Author) Jack du Brul is the author of the Philip MErcer series, and co-author with Clive Cussler of seven Oregon Files novels: The Jungle, Plague Ship, The Silent Sea, Mirage, Corsair, Dark Watch and Skeleton Coast. He lives in Vermont.

In the sixth entry set onboard the Oregon (and the third cowritten with Du Brul), Juan Cabrillo, the one-legged “chairman” of the ancient but technologically sophisticated ship, is hired to dig up the remnants of a crashed plane. But this wasn’t just any plane crash: on board was Fiona Katamora, the U.S. secretary of state, who was on her way to a summit meeting in Libya. Although Cabrillo and his crew are able to recover the wreckage, there is no sign of the secretary. The Libyan foreign minister seems to have plans of his own, which is why the CIA thought to hire Cabrillo rather than to trust the Libyans to investigate the crash. A corsair is a variety of pirate, known for fights off the Barbary Coast more than 200 years ago. But they’re back with a vengeance here, infesting the waters of Asia and Africa and becoming a terrorist threat like no other. The Libyans are after something, something centuries old, and only Cabrillo can find the answers. The action, suspense, and drama are full throttle throughout. Cussler fans used to international intrigue and battles at sea will not be disappointed.