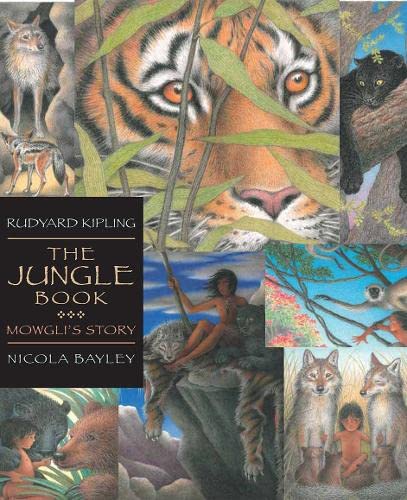 "Walker Illustrated Classics" is a new series which brings together soem of the best-loved stories ever told, illustrated by some of today's finest artists. These exquisitely designed books, with their magnificent words and glorious pictures, are a pleasure to read - and re-read. The classics have never looked so good!First published over a century ago, these three stories about the man-cub Mowgli have delighted adults and children ever since. The stories tell of Mowgli's upbringing among the wolves; his lessons in the Law of the Jungle from Baloo the bear, Bagheera the black panther and Kaa the python; his kidnap by the Monkey People and his clash with the evil tiger, Shere Khan. Illustrated in ravishing full-colour and exquisite detail by award-winning artist Nicola Bayley, this is a book to treasure for ever.

Raised by a pack of wolves, the little boy known as Mowgli forms the human heart of an animal community in the Indian wilderness. These selections from The Jungle Book, The Second Jungle Book, and Many Inventions offer a chronological presentation of every episode from Rudyard Kipling's beloved tales of a feral child. This edition of the stories, all except one of which were originally published in magazines in 1893 and 1894, includes the charming epigrammatic poems that appeared in the first compilations.
The adventures begin with "Mowgli's Brothers," in which the orphan is rescued from the wrath of Shere Khan, the man-eating tiger. Upon his adoption into the wolf pack, Mowgli is schooled in the Law of the Jungle by Baloo the bear and Bagheera the panther. Eight additional tales trace the boy's growing knowledge of jungle lore as well as his moral development and return to human society. Kipling's powerfully original fables, recounted in richly evocative prose, continue to enchant readers of all ages.
Dover (2015) unabridged republication of stories from The Jungle Book (1894), The Second Jungle Book (1895), and Many Inventions (1893), all published by The Macmillan Company, London.
See every Dover book in print at
www.doverpublications.com

Rudyard Kipling (1865-1936), poet, short-story writer and journalist, was born in India. In 1907 he became the first English writer to be awarded the Nobel Prize for Literature. Among his classic works are the poem If and Just-So Stories. He is buried in Poets' Corner in Westminster Abbey. Nicola Bayley is one of this country's best-loved artists. Both Katje the Windmill Cat and The Mousehole Cat were shortlisted for the Kate Greenaway Medal. She lives in London.

Book Description -. Paperback. Condition: Very Good. The Jungle Book: Walker Illustrated Classic (Walker Illustrated Classics) This book is in very good condition and will be shipped within 24 hours of ordering. The cover may have some limited signs of wear but the pages are clean, intact and the spine remains undamaged. This book has clearly been well maintained and looked after thus far. Money back guarantee if you are not satisfied. See all our books here, order more than 1 book and get discounted shipping. Seller Inventory # 7719-9781406304787

Book Description Walker Books 04/05/2009, 2009. Paperback. Condition: Very Good. Shipped within 24 hours from our UK warehouse. Clean, undamaged book with no damage to pages and minimal wear to the cover. Spine still tight, in very good condition. Remember if you are not happy, you are covered by our 100% money back guarantee. Seller Inventory # 6545-9781406304787

Book Description Paperback. Condition: Very Good. The book has been read, but is in excellent condition. Pages are intact and not marred by notes or highlighting. The spine remains undamaged. Seller Inventory # GOR003336056

Book Description Paperback. Condition: Good. The book has been read but remains in clean condition. All pages are intact and the cover is intact. Some minor wear to the spine. Seller Inventory # GOR005131537

Shipping: US$ 6.83
From United Kingdom to U.S.A.
Destination, rates & speeds

Book Description Walker, 2009. Paperback. Condition: Used; Good. **Simply Brit** Shipped with Premium postal service within 24 hours from the UK with impressive delivery time. We have dispatched from our book depository; items of good condition to over ten million satisfied customers worldwide. We are committed to providing you with reliable and efficient service at all times. Seller Inventory # 1599326

Book Description Walker, 2009. Paperback. Condition: Used; Good. **SHIPPED FROM UK** We believe you will be completely satisfied with our quick and reliable service. All orders are dispatched as swiftly as possible! Buy with confidence!. Seller Inventory # mon0001931453

Book Description Walker Books, 2009. Paperback. Condition: Good. Good condition is defined as: a copy that has been read but remains in clean condition. All of the pages are intact and the cover is intact and the spine may show signs of wear. The book may have minor markings which are not specifically mentioned. Most items will be dispatched the same or the next working day. Seller Inventory # wbb0013025763

Book Description Paperback. Condition: Fair. A readable copy of the book which may include some defects such as highlighting and notes. Cover and pages may be creased and show discolouration. Seller Inventory # GOR009184350