Items related to The Secret Garden 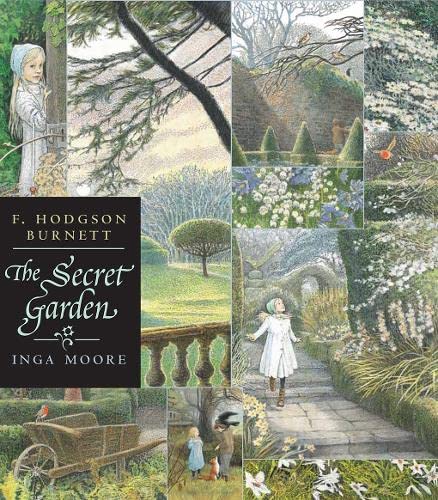 "Walker Illustrated Classics" is a new series which brings together some of the best-loved stories ever told, illustrated by some of today's finest artists. These exquisitely designed books, with their magnificent words and glorious pictures, are a pleasure to read - and re-read. The classics have never looked so good!When orphan Mary Lennox arrives from India to live with her uncle, everyone at Misselthwaite Manor thinks her a most disagreeable child. Then one day she discovers a secret garden, locked and hidden for ten years. With the help of Dickon and her spoilt, invalid cousin, Colin, Mary brings the garden back to life; and as she does, the mystery behind it is revealed. An instant classic, "The Secret Garden" has been cherished by generations of readers since its publication in 1911. Beautifully illustrated by Inga Moore.

Mistress Mary is quite contrary until she helps her garden grow. Along the way, she manages to cure her sickly cousin Colin, who is every bit as imperious as she. These two are sullen little peas in a pod, closed up in a gloomy old manor on the Yorkshire moors of England, until a locked-up garden captures their imaginations and puts the blush of a wild rose in their cheeks; "It was the sweetest, most mysterious-looking place any one could imagine. The high walls which shut it in were covered with the leafless stems of roses which were so thick, that they matted together.... 'No wonder it is still,' Mary whispered. 'I am the first person who has spoken here for ten years.'" As new life sprouts from the earth, Mary and Colin's sour natures begin to sweeten. For anyone who has ever felt afraid to live and love, The Secret Garden's portrayal of reawakening spirits will thrill and rejuvenate. Frances Hodgson Burnett creates characters so strong and distinct, young readers continue to identify with them even 85 years after they were conceived. (Ages 9 to 12)

What secrets lie behind the doors at Misselthwaite manor? Recently arrived at her uncle's estate, orphaned mary Lennox is spoiled, sickly, and certain she won't enjoy living there. Then she discovers the arched doorway into an overgrown garden, shut up since the death of her aunt ten years earlier. Mary soon begins transforming it into a thing of beauty--unaware that she is changing too.

But Missalthwaite hides another secret, as Mary discovers one night. High in a dark room, away from the rest of the house, lies her young cousin Colin, who believes he is an incurable invalid, destined to die young. His tantrums are so frightful, no one can reason with him. If only, Mary hopes, she can get Colin to love the secret garden as much as she does, its magic wil work wonders on him.

Book Description Walker Books Ltd, 2009. Condition: Good. Shows some signs of wear, and may have some markings on the inside. Seller Inventory # GRP114716858

Book Description Walker Books Ltd. Paperback. Condition: Very Good. A copy that has been read, but remains in excellent condition. Pages are intact and are not marred by notes or highlighting, but may contain a neat previous owner name. The spine remains undamaged. At ThriftBooks, our motto is: Read More, Spend Less. Seller Inventory # G1406318035I4N00

Book Description Walker Books Ltd. Paperback. Condition: As New. An apparently unread copy in perfect condition. Dust cover is intact; pages are clean and are not marred by notes or folds of any kind. At ThriftBooks, our motto is: Read More, Spend Less. Seller Inventory # G1406318035I2N00

Book Description Walker, 2009. Paperback. Condition: Used; Good. **SHIPPED FROM UK** We believe you will be completely satisfied with our quick and reliable service. All orders are dispatched as swiftly as possible! Buy with confidence!. Seller Inventory # mon0002324136

Book Description Walker, 2009. Paperback. Condition: Used; Acceptable. **Simply Brit** Shipped with Premium postal service within 24 hours from the UK with impressive delivery time. We have dispatched from our book depository; items of good condition to over ten million satisfied customers worldwide. We are committed to providing you with reliable and efficient service at all times. Seller Inventory # 2776334

Book Description Walker, 2009. Paperback. Condition: Used; Good. **Simply Brit** Shipped with Premium postal service within 24 hours from the UK with impressive delivery time. We have dispatched from our book depository; items of good condition to over ten million satisfied customers worldwide. We are committed to providing you with reliable and efficient service at all times. Seller Inventory # 1461043

Book Description -. Paperback. Condition: Very Good. The Secret Garden: Walker Illustrated Classic (Walker Illustrated Classics) This book is in very good condition and will be shipped within 24 hours of ordering. The cover may have some limited signs of wear but the pages are clean, intact and the spine remains undamaged. This book has clearly been well maintained and looked after thus far. Money back guarantee if you are not satisfied. See all our books here, order more than 1 book and get discounted shipping. Seller Inventory # 7719-9781406318036

Book Description Walker Books 06/04/2009, 2009. Paperback. Condition: Very Good. Shipped within 24 hours from our UK warehouse. Clean, undamaged book with no damage to pages and minimal wear to the cover. Spine still tight, in very good condition. Remember if you are not happy, you are covered by our 100% money back guarantee. Seller Inventory # 6545-9781406318036

Book Description Paperback. Condition: Very Good. The book has been read, but is in excellent condition. Pages are intact and not marred by notes or highlighting. The spine remains undamaged. Seller Inventory # GOR002487081