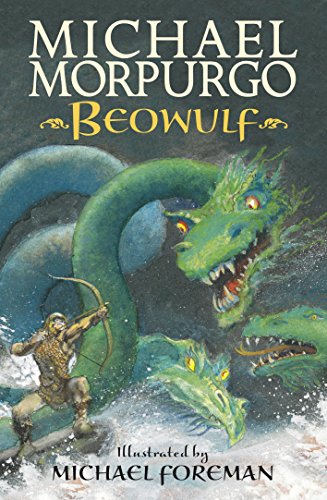 Michael Morpurgo was 2003-2005 Children's Laureate, has written over one hundred books and is the winner of many awards, including the Whitbread Children's Book Award, the Smarties Book Prize, the Blue Peter Award and the Red House Children's Book Award. His books are translated and read around the world and his hugely popular novel War Horse, already a critically acclaimed stage play, is now a successful feature film. Michael and his wife, Clare, founded the charity Farms for City Children and live in Winkleigh, Devon. www.michaelmorpurgo.org Michael Foreman is one of the world's leading illustrators. He has won several major awards, including the Kate Greenaway Medal, most recently for War Boy. His titles for Walker Books include Sir Gawain and the Green Knight (9781406348880), Why the Animals Came to Town (9781406329957), Mia's Story (9781844282784), Say Hello (9781406307245) and A Child's Garden (9781406312072). He lives in London.

Grade 7 Up–Morpurgo retells the classic story of the courageous young warrior from the land of Geats (now southern Sweden) who used his brute strength to save the neighboring Danes, then his own kinsmen, by slaying two horrible monsters, a sea serpent, and a massive dragon. The tale has been divided into three segments: the story of the monster Grendel's defeat; the slaying of his mother, the sea-hag; and the battle with the death dragon of the deep. Morpurgo has retold the tale in twisting, long-winded sentences that call to mind the way in which old epics were recounted by poets and bards. The text-filled pages framed with a Celtic-style border are broken up with small watercolor illustrations tucked here and there to help move things along. Many attractive full-page watercolor and pastel paintings illustrate important action-filled scenes–battles, a banquet, and Beowulf's funeral pyre. Morpurgo's short acknowledgment states that his inspiration for this version of the Old English classic came from the likes of Seamus Heaney, Rosemary Sutcliffe, and Kevin Crossley-Holland. The lack of introductory material and historical background is noticeable but overall this is a fine retelling.–Susan Scheps, Shaker Heights Public Library, OH
Copyright © Reed Business Information, a division of Reed Elsevier Inc. All rights reserved.

Book Description 2013. Paperback. Condition: New. Paperback. The epic Anglo-Saxon legend is brilliantly recreated by an award-winning author/illustrator team.In fifth-century Denmark, a murderous monster stalks the night, and only the great prince o.Shipping may be from multiple locations in the US or from the UK, depending on stock availability. 160 pages. 0.126. Seller Inventory # 9781406348873

Book Description 2013. Paperback. Condition: New. Paperback. The epic Anglo-Saxon legend is brilliantly recreated by an award-winning author/illustrator team.In fifth-century Denmark, a murderous monster stalks the night, and only the g.Shipping may be from our Sydney, NSW warehouse or from our UK or US warehouse, depending on stock availability. 160 pages. 0.126. Seller Inventory # 9781406348873