Items related to The Pied Piper of Hamelin

The Pied Piper of Hamelin 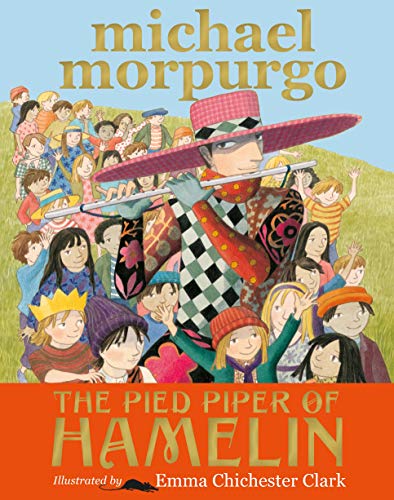 Michael Morpurgo has written more than ninety books and and has won numerous prizes, including both the Whitbread Award and the Children's Book Award. His books include retellings of Hansel and Gretel, illustrated by Emma Chichester Clark, as well as Beowulf and Sir Gawain the Green Knight, both illustrated by Michael Foreman. Michael was Children's Laureate between 2003 - 2005. He lives near Winkleigh, Devon. Emma Chichester Clark studied at the Chelsea School of Art and the Royal College of Art from 1980 to 1983, where she was taught by Quentin Blake. In 1988, she won the Mother Goose Award for the most exciting newcomer to children's book illustration. She has written and illustrated many acclaimed books for young readers, including Goldilocks and the Three Bears, which she retold and illustrated, and Hansel and Gretel, retold by Michael Morpurgo. She lives in London, W6.

True to the spirit of the original tale, this attractive retelling adds some new twists and a happy ending without denying the dark, universal drama. The narrator is a small orphan boy on a crutch who lives with little food and shelter in the Hamelin shantytown, which is ignored by a fat, cruel mayor and his powerful cronies. When Hamelin is overrun with a plague of rats, the Pied Piper comes to town and gets rid of the problem. But when the mayor reneges on his bargain, the Piper plays music that lures all the local children, who follow him out of town in a long, dancing, happy line. Clark’s large, bright spreads will have kids poring over the minutely detailed collage scenes, from the crowded slums to the Piper leading thousands of rats into the river. Then there are the close-ups that contrast the ragged kids with the pompous mayor and his overdressed companions. In this version, the Piper gets the power to clean up the filth and restore the town, and the children come back to a new world. Grades K-3. --Hazel Rochman

1. The Pied Piper of Hamelin

2. The Pied Piper of Hamelin

4. The Pied Piper of Hamelin

5. THE PIED PIPER OF HAMELIN