Items related to The Tale of Mrs. Ladybug (Tuck-me-in Tales) 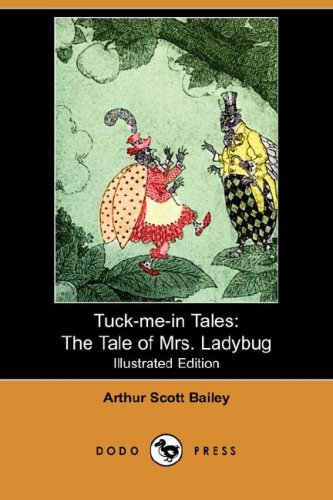 Arthur Scott Bailey (November 15, 1877 – October 17, 1949) was an American writer. He was the author of more than forty children's books. He was born in St. Albans, Vermont, United States, the second child of Winfield Scott Bailey and Harriet Sarah Goodhue Bailey attended St. Albans Academy and graduated in 1896, in a class of only eleven other students. He then went on to the University of Vermont in Burlington, Vermont, where he became involved in a fraternal organization, Sigma Phi. He left UVM in 1901 and transferred to Harvard, where he earned his bachelor's degree. After graduating Harvard in 1902, Bailey traveled to Chicago and put his knowledge of growing up in his father's store to good use, becoming a wholesale grocery merchant. This lasted until 1904, when Bailey travelled to New York City and became an editor for various publishers. Which publishers these were is unknown, with the exception of the Macaulay Company, where he was working in early 1915. His work also includes the comic strip Animal Whys, which was syndicated in 1937. Bailey was known for being an intellectual, and was a member of the Salamagundi Club of New York. In terms of religion, Bailey was a Unitarian and politically, he was a Republican of the old school. Bailey died on October 17, 1949, at 71 years of age. Allen W. Goodspeed grew up to become the Professor Emeritus of Forest Management at West Virginia University; and has a scholarship named in his honor. He died on September 30, 1991, and had 10 grandchildren.

4. The Tale of Mrs. Ladybug