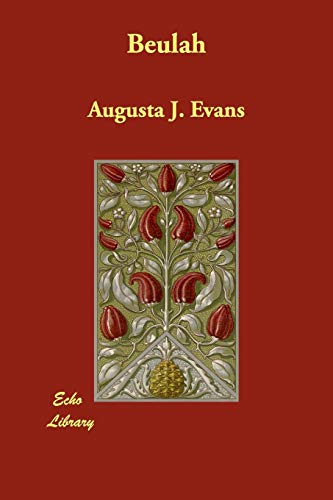 Written when the author was 18 and published in 1859, "Beulah" sold over 22,000 copies in the first year of publication - a monumentaal achievement.

Elizabeth Fox-Genovese is the Eleonore Raoul Professor of the Humanities and director of the Institute for Women's Studies at Emory University. She is the author of many books, including Within the Plantation Household: Black and White Women of the Old South and Feminism and Its Illusions: A Critique of Individualism.

Beulah Benton, the protagonist of this reissued novel of the antebellum South, is plucky, feminist, intellectual--but given to convoluted philosophical musings and, ultimately, acquiescent to women's traditional roles. In the formal, sometimes overwrought language of the period, Evans takes the orphaned Beulah from her trouble-ridden childhood through her stormy young womanhood. Despite the many poignant events--including the death of Beulah's young sister and the social ostracism she faces as an orphan--Evans's energetic and direct style achieves sincerity of feeling more often than melodrama. Beulah's lot begins to improve when Guy Hartwell, the doctor who tends her in a serious illness, becomes her guardian. Although she vows to remain unmarried and earn her living as an author and teacher, Beulah ultimately realizes what the reader has known for some time--that Guy is in love with her and she with him. Her transition from independent female to little woman is strained and abrupt, yet, for its time, the novel is remarkable for the seriousness with which it takes women's intellectual pursuits and the dignity it gives to the single life. Fox-Genovese wrote Within the Plantation Household.