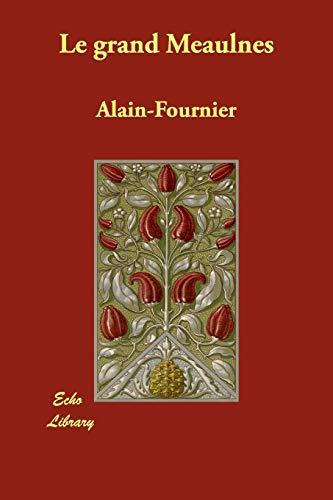 The classic French novel written by a soldier, who would later die during World War I, tells the story of Auguste Meaulnes and the "domain mysterieux."

When Alain-Fournier was killed in battle on the Meuse in 1914, he left behind Le Grand Meaulnes, a novel of wistful enchantment. The tale is recounted by François Seurel, whose father heads the village school where Augustin Meaulnes comes to board. A tall, somber youth of 17, he instantly becomes the class ringleader, and is soon known as le grand Meaulnes. When the youth sets off on an impetuous errand of a few hours and doesn't return for several days, events take a darker turn.

After Meaulnes's reappearance, Seurel notices his companion's unrest, and tries to uncover its source. He wakes in the midwinter nights to find Meaulnes pacing the room "like someone rummaging about in his memory, sorting out scraps." Meaulnes remains disconsolate, but finally reveals the nature of his travels, and the strange days of revelry at his unintended destination--the "lost domain" to which he is desperate to return and doesn't know how to find. Seurel rightly guesses that Meaulnes met a young woman there, and that he is in love. "Often afterwards, when he had gone to sleep after trying desperately to recapture that beautiful image, he saw in his dreams a procession of young women who resembled her ... but not one of them was this tall slender girl." The two friends set about retracing Meaulnes's path, and their journeys take them into manhood, when Meaulnes finds at last a way to bring his quest full circle.

Alain-Fournier pairs his tightly twisting plot with a poignant nostalgia. His descriptive powers bring to the reader the sights and sounds--the icy winter winds and rattling carriage wheels--from an earlier time, all the while weaving a brilliant affirmation of loyalty and lasting friendship. --Joannie Kervran Stangeland

Henri-Alban Fournier's classic 1913 French novel is the onlyone he wrote before dying in WWI. The plot is simple--villageschoolboy François befriends charismatic older schoolmate AugustinMeaulnes. Meaulnes tells François that when lost one day, he hadstumbled across a mysterious country estate (the domain), where hefell in love with a beautiful girl. From then on, François andMeaulnes try, and fail, to find the girl and lost domain again. Toldin intense, evocative prose, this is a story about the magical natureof childhood, and about how, upon entering adulthood, we leave behindpart of that magic, which we can never find again. Michael Maloneyreads clearly, with excellent pacing in a pleasant, medium-rangevoice. However, he is overly affected by the book's sense of nostalgiaand mystery. He often employs a tone of alarmed wonder, whichdiminishes, rather than enhances, the story. This tendency diminishesabout half-way through the book. All in all, a creditable reading of atrue classic. A.C.S. © AudioFile 2003, Portland, Maine-- Copyright © AudioFile, Portland, Maine