Items related to The Amber Spyglass (His Dark Materials, Book 3) 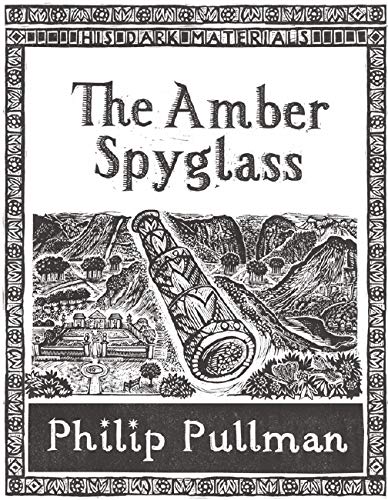 From the very start of its very first scene, The Amber Spyglass will set hearts fluttering and minds racing. All we'll say here is that we immediately discover who captured Lyra at the end of The Subtle Knife, though we've yet to discern whether this individual's intent is good, evil, or somewhere in between. We also learn that Will still possesses the blade that allows him to cut between worlds, and has been joined by two winged companions who are determined to escort him to Lord Asriel's mountain redoubt. The boy, however, has only one goal in mind--to rescue his friend and return to her the alethiometer, an instrument that has revealed so much to her and to readers of The Golden Compass and its follow-up. Within a short time, too, we get to experience the "tingle of the starlight" on Serafina Pekkala's skin as she seeks out a famished Iorek Byrnison and enlists him in Lord Asriel's crusade:

A complex web of thoughts was weaving itself in the bear king's mind, with more strands in it than hunger and satisfaction. There was the memory of the little girl Lyra, whom he had named Silvertongue, and whom he had last seen crossing the fragile snow bridge across a crevasse in his own island of Svalbard. Then there was the agitation among the witches, the rumors of pacts and alliances and war; and then there was the surpassingly strange fact of this new world itself, and the witch's insistence that there were many more such worlds, and that the fate of them all hung somehow on the fate of the child.

Meanwhile, two factions of the Church are vying to reach Lyra first. One is even prepared to give a priest "preemptive absolution" should he succeed in committing mortal sin. For these tyrants, killing this girl is no less than "a sacred task."

In the final installment of his trilogy, Philip Pullman has set himself the highest hurdles. He must match its predecessors in terms of sheer action and originality and resolve the enigmas he already created. The good news is that there is no critical bad news--not that The Amber Spyglass doesn't contain standoffs and close calls galore. (Who would have it otherwise?) But Pullman brings his audacious revision of Paradise Lost to a conclusion that is both serene and devastating. In prose that is transparent yet lyrical and 3-D, the author weaves in and out of his principals' thoughts. He also offers up several additional worlds. In one, Dr. Mary Malone is welcomed into an apparently simple society. The environment of the mulefa (again, we'll reveal nothing more) makes them rich in consciousness while their lives possess a slow and stately rhythm. These strange creatures can, however, be very fast on their feet (or on other things entirely) when necessary. Alas, they are on the verge of dying as Dust streams out of their idyllic landscape. Will the Oxford dark-matter researcher see her way to saving them, or does this require our young heroes? And while Mary is puzzling out a cure, Will and Lyra undertake a pilgrimage to a realm devoid of all light and hope, after having been forced into the cruelest of sacrifices--or betrayals.

Throughout his galvanizing epic, Pullman sustains scenes of fierce beauty and tenderness. He also allows us a moment or two of comic respite. At one point, for instance, Lyra's mother bullies a series of ecclesiastical underlings: "The man bowed helplessly and led her away. The guard behind her blew out his cheeks with relief." Needless to say, Mrs. Coulter is as intoxicating and fluid as ever. And can it be that we will come to admire her as she plays out her desperate endgame? In this respect, as in many others, The Amber Spyglass is truly a book of revelations, moving from darkness visible to radiant truth. --Kerry Fried

"The Amber Spyglass brings the intrigue of "The Golden Compass and "The Subtle Knife to a heart-stopping end, marking the final volume of His Dark Materials as the most powerful of the trilogy.
Along with the return of Lyra, Will, Mrs. Coulter, Lord Asriel, Dr. Mary Malone, and Iorek Byrnison the armored bear, come a host of new characters: the Mulefa, mysterious wheeled creatures with the power to see Dust; Gallivespian Lord Roke, a hand-high spymaster to Lord Asriel; and Metatron, a fierce and mighty angel. So, too, come startling revelations: the painful price Lyra must pay to walk through the land of the dead, the haunting power of Dr. Malone's amber spyglass, and the names of who will live--and who will die--for love. And all the while, war rages with the Kingdom of Heaven, a brutal battle that--in its shocking outcome--will uncover the secret of Dust. Philip Pullman deftly brings the cliff-hangers and mysteries of His Dark Materials to an earthshattering conclusion--and confirms his fantasy trilogy as an undoubted and enduring classic.

Book Description 2007. Paperback. Condition: New. Lantern Slides ed. Paperback. An elegant new edition, featuring a woodcut engraving cover illustration by John Lawrence, and containing never-before published material. The final volume in Philip Pullman's internation.Shipping may be from multiple locations in the US or from the UK, depending on stock availability. 548 pages. 0.720. Seller Inventory # 9781407102566

Book Description 2007. Paperback. Condition: New. Lantern Slides ed. Paperback. An elegant new edition, featuring a woodcut engraving cover illustration by John Lawrence, and containing never-before published material. The final volume in Philip Pullman'.Shipping may be from our Sydney, NSW warehouse or from our UK or US warehouse, depending on stock availability. 548 pages. 0.720. Seller Inventory # 9781407102566