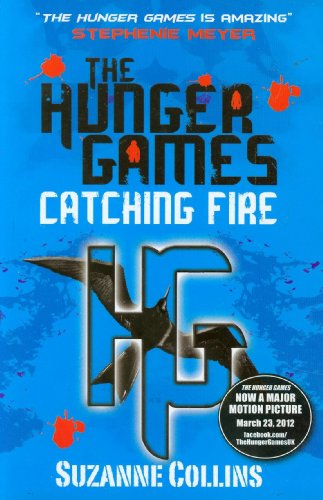 This story and audio fulfill the promise of the stunning debut in this series, THE HUNGER GAMES, in which a cruel contest required 24 young people to fight in mortal combat. Carolyn McCormick delivers the first-person narrative of Katniss, the heroine whose brilliant strategy in that book thwarted tradition and turned her and her partner, Peeta, into victors. McCormick's phrasing is clipped, almost staccato, a style that embodies Katniss's secretive, wary attitudes. The tension builds as the oppression of the controlling President Snow inflames rebellion in Katniss and her fellow citizens. At the climax McCormick narrates at a breakneck pace as Katniss and Peeta compete against all previous winners of the combat tournament. Listeners will be eager for the next installment. S.W. Winner of AudioFile Earphones Award © AudioFile 2009, Portland, Maine

Book Description Scholastic. PAPERBACK. Condition: New. 1407109367 Book is in perfect condition and will be SHIPPED WITHIN 24 hours of receiving the order! *** IF I have multiple copies, COVERS COULD BE DIFFERENT; IF important please ask. ***. Seller Inventory # BX20-0067

Book Description 2009. Paperback. Condition: New. Paperback. Against all odds Katniss Everdeen has won the annual Hunger Games with fellow District 12 tribute Peeta Mellark. But it was a victory won by defiance of the Capitol and its harsh rules. Ka.Shipping may be from multiple locations in the US or from the UK, depending on stock availability. 448 pages. 0.308. Seller Inventory # 9781407109367

Book Description Scholastic, 2009. Paperback. Condition: New. 1st Edition. Mint condition.Scholastic,2009.First UK paperback edition-40th printing.Paperback in mint condition.The book is new.472pp. This is another paragraph Product Description: fter winning the brutal Hunger Games, Katniss Everdeen returns to her district, hoping for a peaceful future. But Katniss starts to hear rumours of a deadly rebellion against the Capitol. A rebellion that she and Peeta have helped to create. As Katniss and Peeta are forced to visit the districts on the Capitol's cruel Victory Tour, the stakes are higher than ever. Unless Katniss and Peeta can convince the world that they are still lost in their love for each other, the consequences will be horrifying. The terrifying sequel to The Hunger Games. Seller Inventory # 6367

Shipping: US$ 16.53
From United Kingdom to U.S.A.
Destination, rates & speeds