Items related to The Subtle Knife (His Dark Materials)

The Subtle Knife (His Dark Materials) 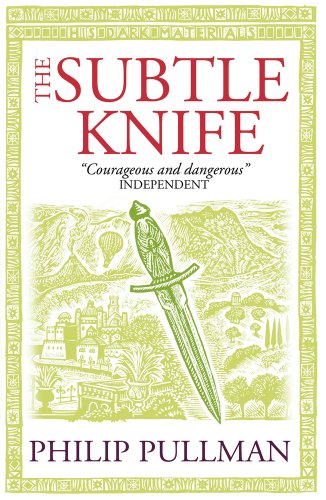 With The Golden Compass Philip Pullman garnered every accolade under the sun. Critics lobbed around such superlatives as "elegant," "awe-inspiring," "grand," and "glittering," and used "magnificent" with gay abandon. Each reader had a favorite chapter--or, more likely, several--from the opening tour de force to Lyra's close call at Bolvangar to the great armored-bear battle. And Pullman was no less profligate when it came to intellectual firepower or singular characters. The dæmons alone grant him a place in world literature. Could the second installment of his trilogy keep up this pitch, or had his heroine and her too, too sullied parents consumed him? And what of the belief system that pervaded his alternate universe, not to mention the mystery of Dust? More revelations and an equal number of wonders and new players were definitely in order.

The Subtle Knife offers everything we could have wished for, and more. For a start, there's a young hero--from our world--who is a match for Lyra Silvertongue and whose destiny is every bit as shattering. Like Lyra, Will Parry has spent his childhood playing games. Unlike hers, though, his have been deadly serious. This 12-year-old long ago learned the art of invisibility: if he could erase himself, no one would discover his mother's increasing instability and separate them.

As the novel opens, Will's enemies will do anything for information about his missing father, a soldier and Arctic explorer who has been very much airbrushed from the official picture. Now Will must get his mother into safe seclusion and make his way toward Oxford, which may hold the key to John Parry's disappearance. But en route and on the lam from both the police and his family's tormentors, he comes upon a cat with more than a mouse on her mind: "She reached out a paw to pat something in the air in front of her, something quite invisible to Will." What seems to him a patch of everyday Oxford conceals far more: "The cat stepped forward and vanished." Will, too, scrambles through and into another oddly deserted landscape--one in which children rule and adults (and felines) are very much at risk. Here in this deathly silent city by the sea, he will soon have a dustup with a fierce, flinty little girl: "Her expression was a mixture of the very young--when she first tasted the cola--and a kind of deep, sad wariness." Soon Will and Lyra (and, of course, her dæmon, Pantalaimon) uneasily embark on a great adventure and head into greater tragedy.

As Pullman moves between his young warriors and the witch Serafina Pekkala, the magnetic, ever-manipulative Mrs. Coulter, and Lee Scoresby and his hare dæmon, Hester, there are clear signs of approaching war and earthly chaos. There are new faces as well. The author introduces Oxford dark-matter researcher Mary Malone; the Latvian witch queen Ruta Skadi, who "had trafficked with spirits, and it showed"; Stanislaus Grumman, a shaman in search of a weapon crucial to the cause of Lord Asriel, Lyra's father; and a serpentine old man whom Lyra and Pan can't quite place. Also on hand are the Specters, beings that make cliff-ghasts look like rank amateurs.

Throughout, Pullman is in absolute control of his several worlds, his plot and pace equal to his inspiration. Any number of astonishing scenes--small- and large-scale--will have readers on edge, and many are cause for tears. "You think things have to be possible," Will demands. "Things have to be true!" It is Philip Pullman's gift to turn what quotidian minds would term the impossible into a reality that is both heartbreaking and beautiful. --Kerry Fried

"JUST AS QUICK-MOVING AND UNPUTDOWNABLE AS [THE GOLDEN COMPASS] . . . The mysteries deepen and the wonders grow even more extravagant."
--The Washington Post Book World

"More than fulfilling the promise of The Golden Compass, this second volume in the His Dark Materials trilogy starts off a heart-thumping pace and never slows down. . . . The grandly exuberant storytelling is sure to enthrall."
--Publishers Weekly (starred review)

1. The Subtle Knife (His Dark Materials)

2. The Subtle Knife (His Dark Materials)

Book Description Paperback. Condition: Very Good. The book has been read, but is in excellent condition. Pages are intact and not marred by notes or highlighting. The spine remains undamaged. Seller Inventory # GOR006574658