Items related to The Ruby in the Smoke (A Sally Lockhart Mystery) [Paperback]...

The Ruby in the Smoke (A Sally Lockhart Mystery) [Paperback] [Jan 01, 2015] Philip Pullman 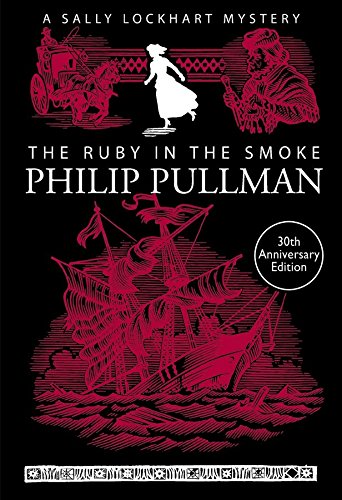 "Her name was Sally Lockhart; and within fifteen minutes, she was going to kill a man." Philip Pullman begins his Sally Lockhart trilogy with a bang in The Ruby in the Smoke--a fast-paced, finely crafted thriller set in a rogue- and scalawag-ridden Victorian London. His 16-year-old heroine has no time for the usual trials of adolescence: her father has been murdered, and she needs to find out how and why. But everywhere she turns, she encounters new scoundrels and secrets. Why do the mere words "seven blessings" cause one man to keel over and die at their utterance? Who has possession of the rare, stolen ruby? And what does the opium trade have to do with it?

As our determined and intelligent sleuth sets her mind to unraveling these dark mysteries, she learns how embroiled she is in the whole affair. As riveting and witty as the sensational "penny dreadfuls" of Victorian England (but thousands of times better written), Pullman's trilogy (including The Shadow in the North and The Tiger in the Well) will have readers on the edges of their seats. Ruby is an ALA Best Book for Young Adults. (Ages 12 and older) --Karin Snelson

In search of clues to the mystery of her father's death, 16-year-old Sally Lockhart ventures into the shadowy underworld of Victorian London. Pursued by villains at every turn, the intrepid Sally finally uncovers two dark mysteries--and realizes that she herself is the key to both.
"In Dickensian fashion, Pullman tells the story of 16-year-old Sally Lockhart, who becomes involved in a deadly web of events as she searches for a mysterious ruby. The novel is a page turner, peopled with despicable hags, forthright heroes, and children living on the underbelly of 19th-century London. The story's events are exciting, with involved plotting. Settings and characterizations are exquisitely drawn. The first entry in a planned trilogy."--(starred) "Booklist. Reading level: 6.7.