Items related to Happiness and Marriage 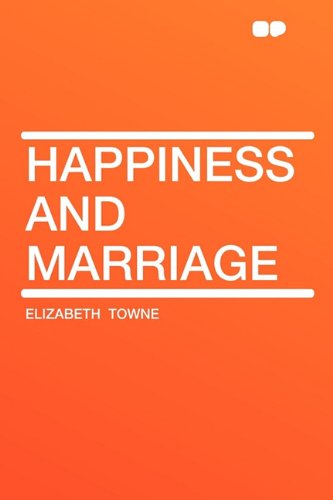 * "The inner side of every cloud Is bright and shining; I therefore turn my clouds about And always wear them inside out-- To show the lining." --James Whitcomb Riley. "And I will show that there is no imperfection in the present; and can be none in the future; And I will show that whatever happens to anybody it may be turned to beautiful results." --Walt Whitman.

Elizabeth Towne (1865 - 1960) was an influential writer, editor, and publisher in the New Thought and self-help movements. She married at quite an early age, but the marriage proved to be an unhappy one which ended in divorce. In order to support her children Elizabeth founded the Nautilus Magazine, which she brought to Holyoke, Massachusetts in 1900, and there married William E. Towne, a book and magazine publisher and distributor, and together they eventually built up a substantial and even profitable business in the publishing and distribution of the magazine and of New Thought books. It is quite evident that Mrs. Towne was very much the editor of Nautilus, and she wrote constantly for the magazine and published numerous books and pamphlets of her own and others' on New Thought lines. In 1924 Elizabeth Towne was elected president of the International New Thought Alliance and assumed editorship of the INTA periodical Bulletin also. The size of Bulletin doubled in a short period from around sixteen pages per issue to as many as thirty-two, and once even fifty-six under Mrs Towne. A letter from a former president of INTA recalls his seeing Elizabeth Towne walking arm in arm down the street one day with poets Edwin Markham and Ella Wheeler Wilcox, an impressive sight as he recalled it. Elizabeth Towne was without doubt one of the more colorful characters in the history of the New Thought Movement.