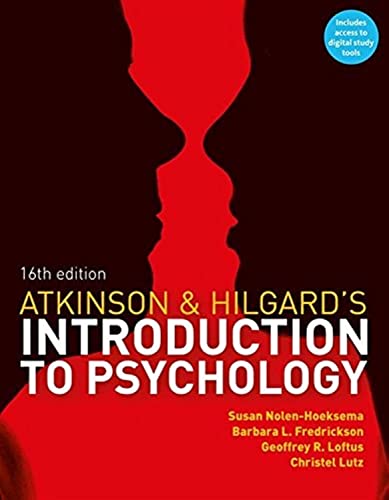 This thorough text, now in its 16th edition, offers a fresh and up-to-date view of the dynamic nature of contemporary psychology. The authors build a strong foundation in the fundamentals of psychology while featuring the most innovative and groundbreaking current research.

Susan Nolen-Hoeksema, Ph.D. who died unexpectedly in January 2013 was Professor of Psychology at Yale University. She received her B.A. in psychology from Yale University and her Ph.D. in clinical psychology from University of Pennsylvania. Nolen-Hoeksema’s research focuses on women’s greater rates of depression compared to men and on the effects of rumination in depression. In addition to her peer-reviewed journal articles, she has published 12 books, including scholarly books, textbooks and books for lay audiences. Nolen-Hoeksema has won three major teaching awards and several awards for her research, including the David Shakow Early Career Award from the American Psychological Association (APA), the Leadership Award from the Committee on Women of the APA, and a Research Career Award from the National Institute for Mental Health.

Book Description Paperback. Condition: NEW. International Edition, Paperback, Brand New, ISBN and Cover image may differ but contents similar to U.S. Edition, Printed in Black & White. End Chapter Exercises may differ. No CD/Access code. Legal to use despite any disclaimer, We do not ship to PO , APO and FPO adresses.Choose Expedited Shipping for FASTER DELIVERY within 4-5 business days.Customer Satisfaction Guaranteed. Seller Inventory # US_9788131528990