Items related to Level 3: The Last King of Scotland Book and MP3 Pack

Level 3: The Last King of Scotland Book and MP3 Pack 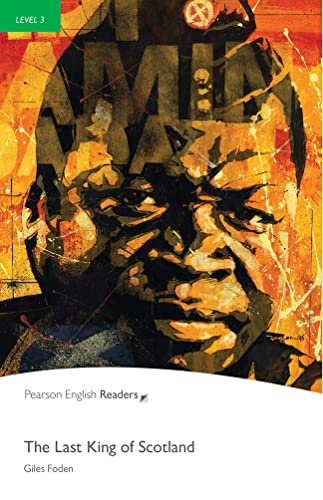 Combining elements of the thriller noir with comedy, this novel is based on the macabre events of Idi Amin's regime. "The Last King of Scotland" is one of the many titles which the tyrant bestowed on himself. It is also about a young Scottish doctor who becomes involved in Amin's administration.

No, we're not talking Bonnie Prince Charlie here. The title character of Giles Foden's debut novel, The Last King of Scotland, is none other than Idi Amin, the former dictator of Uganda. Told from the viewpoint of Nicholas Garrigan, Amin's personal physician, the novel chronicles the hell that was Uganda in the 1970s. Garrigan, the only son of a Scots Presbyterian minister, finds himself far away from Fossiemuir when he accepts a post with the Ministry of Health in Uganda. His arrival in Kampala coincides with the coup that leads to President Obote's overthrow and Idi Amin Dada's ascendancy to power. Garrigan spends only a few days in the capital city, however, before heading out to his assignment in the bush. But a freak traffic accident involving Amin's sports car and a cow eventually brings the good doctor into the dictator's orbit; a few months later, Garrigan is recalled from his rural hospital and named personal physician to the president. Soon enough, Garrigan finds himself caught between his duty to his patient and growing pressure from his own government to help them control Amin.

From Nicholas Garrigan's catbird seat, Foden guides us through the horrors of Amin's Uganda. It would be simple enough to make the dictator merely monstrous, but Foden defies expectation, rendering him appealing even as he terrifies. The doctor "couldn't help feeling awed by the sheer size of him and the way, even in those unelevated circumstances, he radiated a barely restrained energy.... I felt--far from being the healer--that some kind of elemental force was seeping into me." And Garrigan makes a fine stand-in for Conrad's Marlow as he travels up a river of blood from naiveté to horrified recognition of his own complicity. As if this weren't enough, Foden also treats us to a finely drawn portrait of Africa in all its natural, political, and social complexity. The Last King of Scotland makes for dark but compelling reading. --Alix Wilber

Winner of the Whitebread Award
"This decidedly quirky yet absorbing first novel--that brings to mind the diabolical Evelyn Waugh."--"Los Angeles Times Book Review
Shortly after his arrival in Uganda, Scottish doctor Nicholas Garrigan is called to the scene of a bizarre accident: Idi Amin, careening down a dirt road in his red Maserati, has run over a cow. When Garrigan tends to Amin, the dictator, in his obsession for all things Scottish, appoints him as his personal physician. And so begins a fateful dalliance with the central African leader whose Emperor Jones-style autocracy would transform into a reign of terror.
In The Last King of Scotland Foden's Amin is as ridiculous as he is abhorrent: a grown man who must be burped like an infant, a self-proclaimed cannibalist who, at the end of his 8 years in power, would be responsible for 300,000 deaths. And as Garrigan awakens to his patient's baroque barbarism--and his own complicity in it--we enter a venturesome meditation on conscience, charisma, and the slow corruption of the human heart. Brilliantly written, comic and profound, The Last King of Scotland announces a major new talent.
"Genuinely beautiful and disturbing."--"The Village Voice