Items related to Book Of Lies 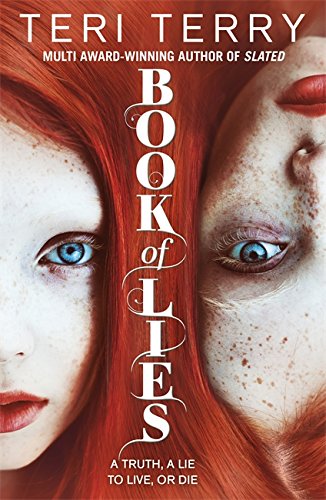 Teri Terry has lived in France, Canada, Australia and England at more addresses than she can count, acquiring four degrees, a selection of passports and an unusual name along the way. Past careers have included scientist, lawyer, optometrist and, in England, various jobs in schools, libraries and an audiobook charity. The footpaths and canal ways of the Buckinghamshire Chilterns where she now lives inspired much of the setting of her futuristic thriller trilogy - Slated, Fractured and Shattered. Teri Terry is also the author of the award-winning Mind Games and Book of Lies. Her books have been translated into twelve languages and won prizes at home and abroad.

There is a genuinely spooky feel to this excellent psychological and supernatural thriller * Book Trust * Highly recommended, especially for those who like their fantasy subtle but chillingly effective, and populated by characters they can believe in * Starburst Magazine * I read Book of Lies in more or less one sitting * The Bookbag *

Book Description Orchard Books Hachette Children's Books. Taschenbuch. Condition: Neu. Neuware - Who lies Who tells the truth Death hangs on the answer. 'Highly recommended, especially for those who like their fantasy subtle but chillingly effective, and populated by characters they can believe in' (Starburst Magazine) Tell a lie and the darkness will find you. Quinn and Piper are twins, but they've never met. A tragic event brings them together, and draws them into a family curse that stretches across centuries. One twin can command the darkness; the other could hold the key to breaking the curse. But when lies become truth and truth looks like lies, who can you believe Don't miss this startling new book from Teri Terry, queen of the YA psychological thriller! They are trapped, frozen. Waiting. Straining against the wood that holds them. The unwary catch a glimpse now and then - feel their desperate hunger, see a glint of red eyes - and scurry out of the shadows of the wood, back to the light. She's coming; it will be soon. They will run free on the moors again. The Hunt will return. And the ground will run with blood. 352 pp. Englisch. Seller Inventory # 9781408334287