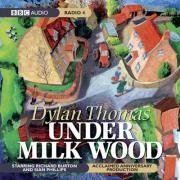 Richard Burton's voice has been digitally remastered and seamlessly mixed with an all-Welsh cast to create a magical, fresh visit to the unique but universal world of Llareggub. Richard Burton's inimitable narration as First Voice in the BBC's 1963 recording of Under Milk Wood was hugely acclaimed. In this 2003 production, the famous radio play has been given a fresh lease of life. Richard Burton's unforgettable performance joins a celebrated all-Welsh cast in a highly-acclaimed dramatisation of this classic 'play for voices'. Touching, eerie and very funny, the play tells the story of a day in the life of the inhabitants of a small Welsh seaside town, their dreams and routines, their loves and regrets, their hopes and fears. With characters and phrases that have entered daily parlance, the play opens with 'To begin at the beginning' and features such much-loved characters as No Good Boyo, Lilly Smalls, Polly Garter, Organ Morgan and Captain Cat. Among the all-Welsh cast are Sian Phillips, Matthew Rhys and Glyn Houston, as well as a special guest appearance by John Humphrys. With an entrancing new musical score by John Hardy, this is set to become the classic version of a spellbinding play.

Dylan Marlais Thomas was born in Swansea on 27 October 1914 and educated at Swansea Grammar School where his father was an English master. He did not learn Welsh although his language has often been described as Welsh written in English. He began writing poetry while a student and continued writing in his spare time when, after leaving school in 1931, he worked as a reporter for the South Wales Daily Post in Swansea. He moved to London in 1934, and in December of that year his first volume of verse, 18 Poems, was published to critical acclaim. He then embarked on a career as a journalist and scriptwriter. As his reputation as a poet grew, so too did his personal popularity and he became well known for his exuberant and charismatic personality. He married Caitlin Macnamara in 1937 and they settled in Laugharne, Wales which was the inspiration for the town in Under Milk Wood. He returned there after many travels in 1949. During the Second World War, he was declared unfit for service and stayed in London, working as a scriptwriter and broadcaster for Strand Films and the BBC. All the while he wrote his own material and published two volumes of short stories, The Map of Love in 1939 and Portrait of the Artist as a Young Dog in 1940. With the publication of New Poems in 1943 and two further volumes, Death and Entrances (1946) and In Country Sleep (1953), his reputation was established. His Collected Poems 1934-1952, published in 1952, was a critical and popular success. In the 1950s, Thomas conducted several reading tours of his work in the United States. They drew large audiences and confirmed his reputation as a charismatic and lyrical poet. In 1953, he returned for a fourth visit to America despite poor health and exhaustion. Here he revised his play for voices Under Milk Wood which he had worked on intermittently for ten years. It had its first reading on stage on 14 May 1953 in New York. The first BBC broadcast was in 1954, although several sections were omitted. In 1963, the producer revisited the project and recorded the full and complete play. Dylan Thomas died in New York on 9 November 1953 and is buried in Laugharne. He and Caitlin had three children.

Book Description BBC Books, 2008. Audio CD. Condition: Good. Connecting readers with great books since 1972. Used books may not include companion materials, some shelf wear, may contain highlighting/notes, may not include cdrom or access codes. Customer service is our top priority!. Seller Inventory # S_274762101