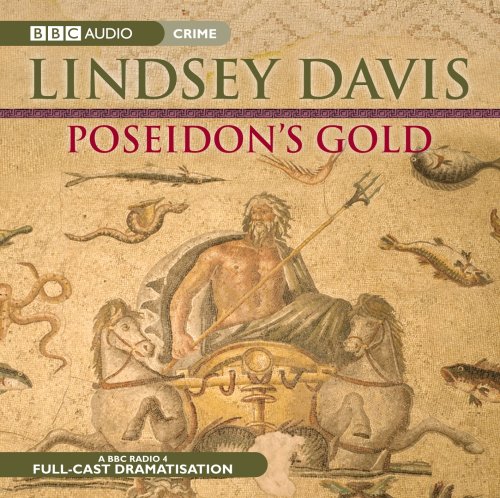 Returning to Rome after his mission to Germania, Falco finds that his mother is being harassed by a centurion named Censorinus, who says he is chasing a debt owed to him by Falco's brother Festus. Censorinus claims that Festus was involved in a syndicate, shipping valuable statues from Greece—and that even when his ship sunk, Festus had guaranteed that everyone in the group would get their money back. Now, however, Festus is dead, and Falco knows he didn't leave a legacy. When Falco refuses to cough up any money, he and Censorinus end up fighting...and later, the centurion turns up dead. Under suspicion of murder, Falco must confront his past and uncover his brother's secrets before he can clear his name and solve the mystery.

This funny and fast moving fifth story in the series stars Anton Lesser, Anna Madeley, and Trevor Peacock. It's a treat for all Falco fans.

STUFF...A classic hard-boiled, smart-mouth detective who happens to work in ancient Rome."
--Molly Ivins
Los Angeles Daily News
After six months in wild Germania, imperial gumshoe Marcus Didius Falco is back in Rome sweet Rome. But his apartment has been ransacked. And although he desperately needs 400,000 sesterces in order to marry his aristocratic love, Helena, his only client is his mother, who insists that he find out whether the scandalous claims against his dead brother, Festus, are true.
Then the chief tarnisher of Festus's good name is murdered, and Marcus becomes the prime suspect. Someone is definitely fiddling with the scales of justice. The more Marcus hunts for the thread that will lead him out of this doom-laden labyrinth of misery and mystery, the less his life is worth. Except, as seems likely, as a meal for the Emperor's hungry lions...
"AN INTRIGUING TALE...COMPULSIVE READING."
--Roanoke Times & World-News
"A VIVIDLY

Lindsey Davis began writing about the Romans with The Course of Honour. Her long–running series featuring laid–back First Century Roman detective Marcus Didius Falco is published in Britain and the U.S., has been translated into many languages. She has won the CWA Historical Dagger, the Dagger in the Library, and a Sherlock for Falco as Best Detective. She has been Honorary President of the Classical Association and is a past Chair of the Crimewriters' Association.

Book Description BBC Physical Audio, 2009. Audio CD. Condition: Very Good. Audio book. Very Good: a copy that has been read, but is in excellent condition. Pages are intact and not marred by notes or highlighting. The spine remains undamaged. Most items will be dispatched the same or the next working day. Seller Inventory # mon0013275678