Items related to "Doctor Who": Hornets' Nest: Hive of Horror... 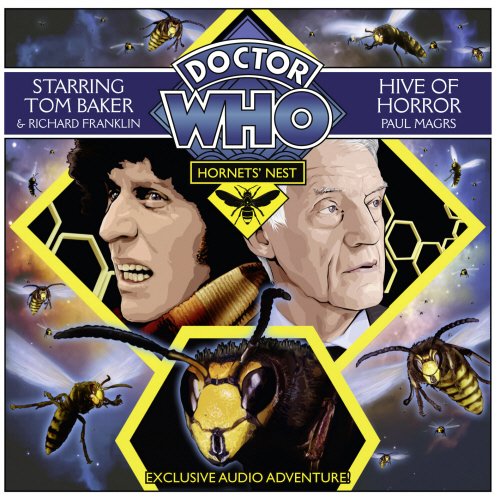 As a new day breaks over Nest Cottage, the Doctor and Mike know they have to face their enemy for a final confrontation. Reduced to miniature size, and with Mrs Wibbsey along as an unwilling adventurer, they venture inside the hornets' nest itself. The Queen lies in wait for the enemy which she and her brood have faced so many times over the millennia. If she is to guarantee the survival of her alien hornet race for another thousand years, this is a battle she must win! The loyalty of the Doctor's friends will be tested to the limit. And perhaps, at last, they will all understand why Mike Yates is so important...With Tom Baker as the Doctor, Richard Franklin as Mike Yates, Susan Jameson as Mrs Wibbsey and Rula Lenska as the Queen, Hive of Horror is the fifth of five linked stories written by the acclaimed Paul Magrs. '...Baker delivers the drama and intensity that you recognise from the Fourth Doctor of old' - Doctor Who Magazine. 1 CD. 1 hr 10 mins.

Paul Magrs was born in 1969 in the North East of England. He has written numerous novels and short stories for adults, teens, children and Doctor Who fans. He teaches Creative Writing at Manchester Metropolitan University.

Fans will jump for joy to hear Tom Baker's resonant, sly voice back where it belongs, as Doctor Who. In this first of five new episodes written exclusively for Baker and BBC Audio, the good Doctor invites an old friend, Captain Mike Yates, to an out-of-the-way English country cottage and regales him with a chilling tale of museum taxidermy gone wild. The unique mix of Doctor Who humor, fantasy, and adventure is all here and sounds smoother and better written than ever. Baker and Richard Franklin, as the Captain, are so familiar and so at ease with their characters that listeners will feel like they're part of the conversation. A new monster aims to destroy the universe, and only the Doctor can save us. Hooray for Doctor Who! B.P. © AudioFile 2009, Portland, Maine

Book Description Condition: New. This is a brand new sealed cd! Case has a crack-will include a new case. Fast Shipping - Safe and Secure Mailer - Our goal is to deliver a better item than what you are hoping for! If not we will make it right!. Seller Inventory # 1XGGQ50003FU_ns