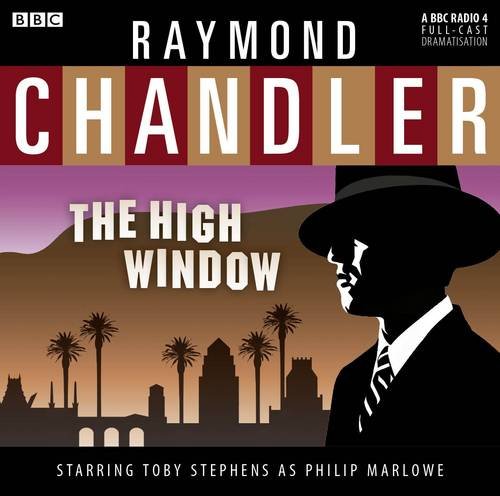 Ed Bishop stars as Philip Marlowe in this powerfully atmospheric BBC Radio dramatization of Raymond Chandler's novel about the cynical, world-weary, wise-cracking shamus whose honesty in a dishonest world sent him down the mean streets again and again in search of some kind of justice. Linda Conquest was very tough, very kissable, and very missing, along with one very valuable old coin. But for some reason the interested parties didn't seem too interested in finding either of them. Especially when the trail led to the underworld and beyond. And by then Marlowe was knee deep in dead men...

A wealthy Pasadena widow with a mean streak, a missing daughter-in-law with a past, and a gold coin worth a small fortune--the elements don't quite add up until Marlowe discovers evidence of murder, rape, blackmail, and the worst kind of human exploitation.
"Raymond Chandler is a star of the first magnitude."-- Erle Stanley Gardner
"Raymond Chandler has given us a detective who is hard-boiled enough to be convincing . . . and that is no mean achievement." -- The New York Times

Raymond Chandler was born in Chicago in 1888. He was educated at Dulwich College, London and studied international law in France and Germany. He published a number of poems and essays in local papers and worked as a reporter, essayist, and book reviewer. After serving for the Canadian Army during World War I he became a bookkeeper and auditor for Dabney Oil Syndicate. In 1939 he published The Big Sleep to instant acclaim in Britain and the US, introducing the world to his iconic private eye, Philip Marlowe. With Farewell My Lovely and The Long Goodbye, Chandler cemented his reputation as a giant of American popular culture and master of a style of detective fiction that would be widely admired and imitated. Chandler turned to screenwriting with Double Indemnity. He continued to write for Hollywood during the heyday of the Hollywood studio system, receiving an Oscar nomination for The Blue Dahlia. In 1946 Chandler received an Edgar Award from the Mystery Writers of America for screenplay and in 1954 for novel writing. During the last year of his life he was made President of the Mystery Writers of America. He died from pneumonia in 1959.