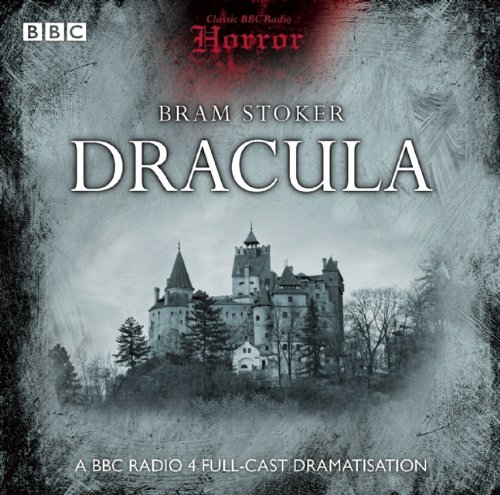 Frederick Jaeger and Phyllis Logan star in this BBC Radio 4 full-cast dramatization of Bram Stoker’s classic horror novel. Summoned to the forbidding heart of the Carpathian mountains in Transylvania, Jonathan Harker journeys to Castle Dracula. There he becomes the unwitting prisoner of a mysterious nobleman whom local legend suggests is Nosferatu, the vampire, a night-stalking beast whose immortality depends on the slaking of his insatiable thirst for human blood. Able to transform himself at will into the shape of a wolf or bat, the evil Count sets sail for England on the scent of new and corruptible flesh. Meanwhile, Harker’s fiancée, Mina, is staying in Whitby when a great storm brings a shipwreck to the town. Suddenly Mina’s friend falls terribly ill. Could her fate be connected to what Harker found in Transylvania? As Count Dracula’s terrible secret is unearthed by the vampire hunter Van Helsing, a breathtaking chase across Europe ensues. . . With specially composed music and sound effects, this terrifying adaptation ably captures the atmosphere of brooding fear and dark eroticism present in Stoker’s original novel.

Book Description BBC Books, 2010. Audio CD. Condition: Good. Connecting readers with great books since 1972. Used books may not include companion materials, some shelf wear, may contain highlighting/notes, may not include cdrom or access codes. Customer service is our top priority!. Seller Inventory # S_279976654

Book Description Paperback. Condition: Very Good. The book has been read, but is in excellent condition. Pages are intact and not marred by notes or highlighting. The spine remains undamaged. Seller Inventory # GOR006014091