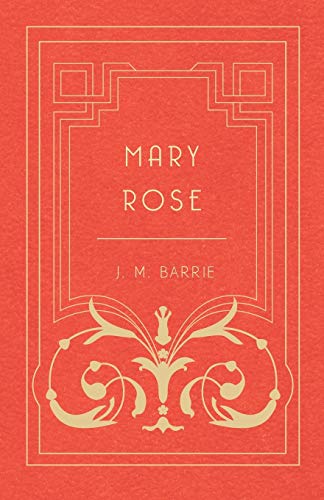 This book contains J. M. Barrie’s play: Mary Rose. During a trip to a remote Scottish island as a child, Mary Rose mysteriously vanishes. The island is searched endlessly to no avail, until Mary unbelievably reappears as strangely as she had vanished, having no recollection of being lost at all. Years later, as a young mother and wife, Mary revisits the island with her husband and once again vanishes without a trace. Reappearing decades later this time, Mary has no recollection of her vanishing and returns having not aged a day. This play is a masterpiece of the stage, enthralling in its mystery and sure to entertain the discerning reader today just as it did when first published. James Matthew Barrie (1860 –1937) was a famous dramatist and author, most famous as being the creator of Peter Pan. This scarce book was originally published in 1929 and is republished here with a new prefatory biography of the author.

J.M. Barrie was born in 1860, the ninth of ten children of hard-working parents in Scotland's jute-weaving industry. Fascinated by stories of her own life told him by his mother, he was determined to write, finding work on the Nottingham Journal after graduating from Edinburgh University. In 1885, he moved to London as a freelance writer and successfully sold the Auld Licht Idylls, a volume based on his mother's tales. By the time Peter Pan opened on the London stage in 1904, Barrie had written more than thirty novels and plays, many autobiographical and several of them major hits such as The Little Minister, Quality Street and The Admirable Crichton. Knighted and awarded the Order of Merit he continued writing into old age. He died in 1937.