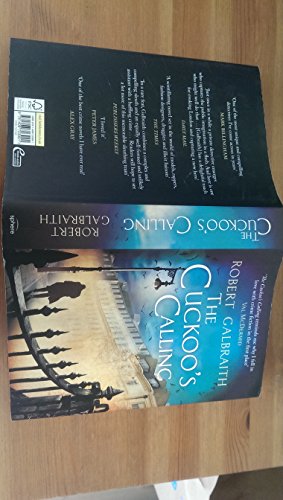 This edition of the book is from the UK, where JK Rowling, the author is from! The Cuckoo's Calling is a 2013 crime fiction novel by J. K. Rowling, published under the pseudonym Robert Galbraith. A brilliant mystery in a classic vein: Detective Cormoran Strike investigates a supermodel's suicide. After losing his leg to a land mine in Afghanistan, Cormoran Strike is barely scraping by as a private investigator. Strike is down to one client, and creditors are calling. He has also just broken up with his longtime girlfriend and is living in his office. Then John Bristow walks through his door with an amazing story: His sister, thelegendary supermodel Lula Landry, known to her friends as the Cuckoo, famously fell to her death a few months earlier. The police ruled it a suicide, but John refuses to believe that. The case plunges Strike into the world of multimillionaire beauties, rock-star boyfriends, and desperate designers, and it introduces him to every variety of pleasure, enticement, seduction, and delusion known to man. You may think you know detectives, but you've never met one quite like Strike. You may think you know about the wealthy and famous, but you've never seen them under an investigation like this.

Robert Galbraith is a pseudonym for J.K. Rowling, author of the Harry Potter series and The Casual Vacancy. Cormoran Strike returns in Galbraith's second novel, The Silkworm.

"Combines a complex and compelling sleuth and an equally well-formed and unlikely assistant with a baffling crime...A stellar debut."―Publishers Weekly (starred review)

"A remarkably assured debut. Robert Galbraith's portrayal of celebrity-obsessed modern London is at once beautifully written and utterly engrossing, his characters so real you could eat dinner with them, his ever-coiling plot guaranteed to keep you up past your bedtime. I couldn't put it down."―Owen Laukkanen, author of The Professionals

"a strong and enticing read ... It's a gripping tale set in bustling London, and the author - whether called Galbraith or Rowling - shows superb flair as a mystery writer"―Irish Examiner

"It's really, really good - beautifully written with a terrific plot ... It's a terrific read, gripping, original and funny ... Please, please give us more of Robert Galbraith and Cormoran Strike. I can't wait for the next"―Richard and Judy, Daily Express

Book Description Sphere, 2013. Hardcover. Condition: New. Dust Jacket Condition: New. 1st Edition. Mint condition.Sphere,2013.First UK edition-3rd reprint.Black hardback(gilt lettering to the spine, two small dents on the edges of the cover) with Dj(two small creases and nicks on the edges of the Dj cover,both in mint condition.The book is new.449pp.Price un-clipped.Heavy book. This is another paragraph Book Description: When a troubled model falls to her death from a snow-covered Mayfair balcony, it is assumed that she has committed suicide. However, her brother has his doubts, and calls in private investigator Cormoran Strike to look into the case. Strike is a war veteran - wounded both physically and psychologically - and his life is in disarray. The case gives him a financial lifeline, but it comes at a personal cost: the more he delves into the young model's complex world, the darker things get - and the closer he gets to terrible danger .A gripping, elegant mystery steeped in the atmosphere of London - from the hushed streets of Mayfair to the backstreet pubs of the East End to the bustle of Soho - The Cuckoo's Calling is a remarkable book. Introducing Cormoran Strike, this is a classic crime novel in the tradition of P. D. James and Ruth Rendell, and marks the beginning of a unique series of mysteries. Seller Inventory # 7438

8. THE CUCKOO'S CALLING AND THE SILKWORM+++SIGNED+++HOTTEST BOOKS IN YEARS+++FIRST EDITION FIRST PRINT+++

Shipping: US$ 21.60
From United Kingdom to U.S.A.
Destination, rates & speeds